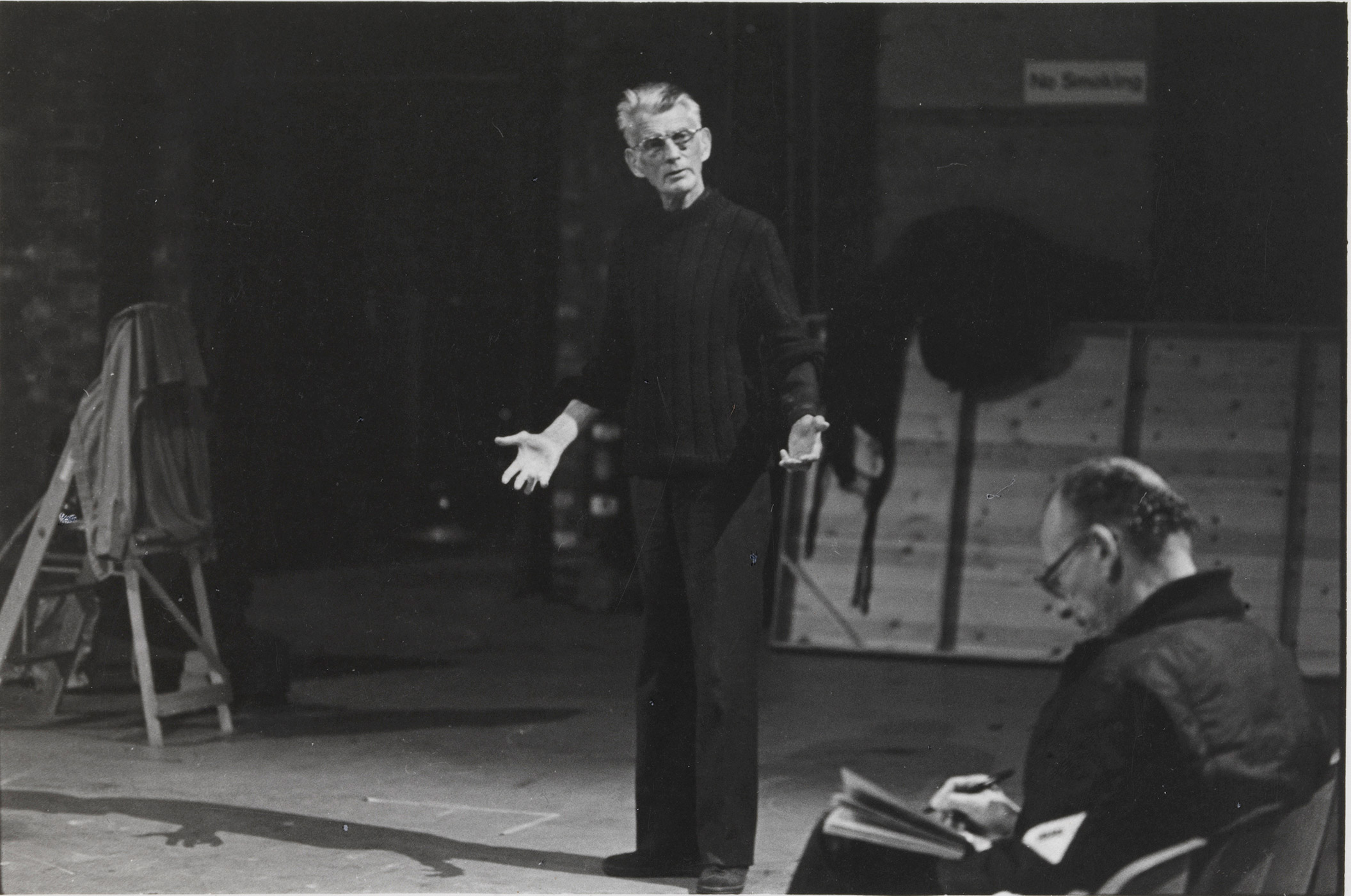 So I’m bingeing on Beckett lately (for a book that I’m working on) and happened across this sharp little comment on patriotism (p. 21 in his essay ‘First Love’, first written in French as Premier Amour, 1946):

What constitutes the charm of our country, apart of course from its scant population, and this without help of the meanest contraceptive, is that all is derelict, with the sole exception of history’s ancient faeces. These are ardently sought after, stuffed and carried in procession. Wherever nauseated time has dropped a nice fat turd you will find our patriots, sniffing it up on all fours, their faces on fire. 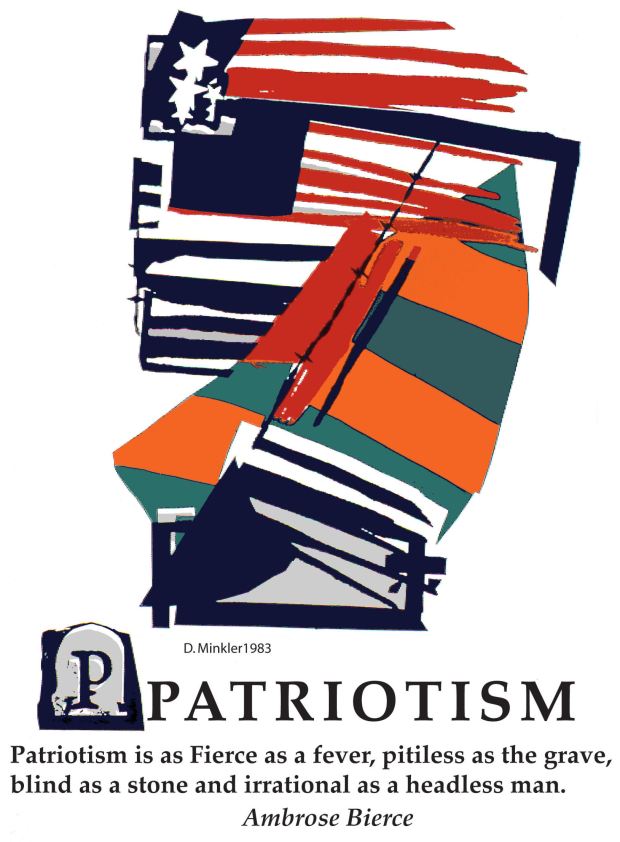 A question arising from the previous post is whether Stringfellow makes any distinction between ‘patriotism’ and ‘nationalism’. I am yet to read all of Stringfellow’s writings, but my sense thus far is that any distinction made between the two typically is equally concerned to hold the two together. So he understands patriotism as one of the clearest expressions of the idolatry of nationhood. Patriotism, according to Stringfellow, is just one of the ‘legion’ of principalities, alongside which he names the Pentagon, the Ford Motor Company, Harvard University, the Diners Club, the Olympics, the Methodist Church (I’m yet to discover what he has against the Methodist Church), capitalism, Maoism, humanism, Mormonism, astrology, the Puritan work ethic, science and scientism, white supremacy, sports, sex, any profession or discipline, technology, money, and the family. (See An Ethic for Christians and Other Aliens in a Strange Land, 78).

He also avers, in Imposters of God, that ‘… no nation enjoys exemption from idolatry; no subjects of any nation can escape the claims of idolatrous patriotism, whatever aesthetic or temperamental distinctions may lodge in this or that particular scene’ (pp. 100–1). And so, in another place, he cautions the ‘biblical person’ to always be ‘wary of claims which the State makes for allegiance, obedience, and service under the rubric called patriotism’ (An Ethic for Christians and Other Aliens in a Strange Land, 113)

Nationalism, therefore, is nothing short of blasphemous, making promises that only God can deliver on, and proclaiming a bastard Gospel which announces a pagan form of (political, economic and, in some cases religious) salvation. Nationalism is, to borrow from Luther, God’s ape (!), never having an original idea in its life but only setting itself in God’s place. Nationalism is simply idol worship sanctioned and demanded by the local god, the state claiming worship that belongs to Christ alone, and a level of commitment that belongs to the body of Christ alone. Rowan Williams’ essay, ‘Being a People: Reflections on the Concept of the “Laity”’ (Religion, State & Society 27/1, 1999), is very helpful here. Reflecting on Stringfellow’s statement that ‘the church is the exemplary nation juxtaposed to all the other nations’, Williams writes:

‘In the face of the demonic presence in national social and political life of the trend towards idolatry, towards absolutising the local and tangible, and of the incapacity of worldly nations effectively to repent and be converted, the Church – a visible, institutional ground of identity, a historically tangible `people’ – represents the calling of all human beings to belong together in justice. In this sense, the Church is also, for Stringfellow, ‘the priest of nations’: while it is visibly a polity and structure among others, it has the task not only of showing to others what the true ground of human belonging is, but also of undertaking what he calls ‘advocacy’ on behalf of every victim in such a way that it becomes worship. This is a complex idea, expressed (as usual with Stringfellow) in painfully compressed form. What it seems to mean is this. The Church’s willingness to stand with the victims of the nations of this world arises out of its own experience of God’s victory over death, its own experience of the possibility of resisting the power of idolatry and so discovering what cannot be destroyed. So when it stands with the powerless and the victims, it does so in conscious and articulate gratitude for God’s ability to take us beyond death. Advocacy becomes praise; and praise itself, properly understood, is a political matter because it witnesses to a God who brings us where no power or principality of this earth can intimidate or confine us’. (p. 12)

‘More than any of the other great and familiar principalities of this world – more than the university or the corporation or the profession, or even race – the nation is a symbol of salvation for men, an image of the Kingdom; it is a facsimile of that order, tranquility, dominion, and fulfillment of life in society which seems lost in the present era and yet after which men yearn persistently despite all disillusionments and defeats’ (p. 47). So begins Stringfellow’s assessment of the idol of patriotism. He proceeds to argue that the ‘sheer arrogance of the idolatrous claims of nations, perhaps especially those possessed of enormous economic and military strength, is so startling’ that our fascination with such idolatry can be ‘explained in no other conceivable manner than as moral insanity’ (p. 48). Throughout the book, Stringfellow assesses that the idols are always in competition with each other, but this competition is nowhere more ferocious, he insists, than where the idols are nations: ‘The necessary corollary of the claim that a nation is God’s surrogate in the world is the invincibility inherent in the ultimacy of a nation’s cause, and this notion is sufficient to rationalize any aggression, subversion, or subjection between nations. This is what every war attests. Or, to put the same thing a bit differently, as with all idols, the actual moral power on which the nation as an idol relies and to which it appeals in its practical conduct is the power of death’ (pp. 48–9).

And as with the other idols that Stringfellow names throughout this book, his concern here is a positive one, positive, that is, as defined by the interruption to the demonic rule of the principalities that takes place in the resurrection of Jesus, an event which reconstitutes and inaugurates humanity into life and freedom amidst the death and bondage regimes of the principalities and their idols. His concern throughout is to assist us to ‘identify our own idols as a first step towards freeing ourselves from enslavement to them’ (p. 51)

Don’t forget Wipf & Stock’s offer to readers of Per Crucem ad Lucem of 40% off the retail price of any of the Stringfellow volumes. To obtain the 40% discount, just include the coupon code STRINGFELLOW with your order.