For many years now as I have been making art, I have been aware of the desire to do something – with string. This began almost fifteen years ago when I was trying find a way to express my experience of living as a woman who was thirty-something. String was a helpful metaphor in bringing this image to birth. String is almost universally available though it is distinctly variable in quality and quantity. String binds things together and, when tied with purpose and skill, will enable us to batten down the hatches in a storm. It does the work it was intended for. It wears over time, and ultimately breaks down. However you like to think about it, string comes to the rescue in both a metaphorical and literal sense.

It was in the printmaking studio that I was able to really make some marks that expressed this boldly and clearly. The printing press and the wet paper working together to record an image evocative of a simple yet satisfying string vest, which later formed the basis for a drawing in which the vest transformed into an elegant gown. 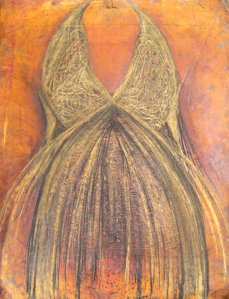 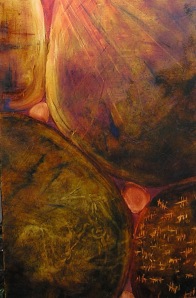 Several years later I was feeling somewhat trapped in the calling to work as an artist. With so much invested already I was aware that the work actually still required me to dig in, spend time, and wait for the next thing to emerge. As I searched for a metaphor, I was reminded of the thing I did with string. Inspired Anselm Kiefer, I wrapped the work with string and included other found objects from around the studio. I hoped that the work would speak of time spent in the service of the image.

Over several years, I played with this metaphor and eventually developed some large scale work that was capable of reverberating strongly in large spaces. What began with the intimacy of play years earlier had become a conceptually-integrated metaphor capable of engaging me in the work of art. However, the work was no longer my own. The string that contained and held the image was a symbol for the conditions of my existence, and this spoke to others who were aware of the conditional nature of their own existence. 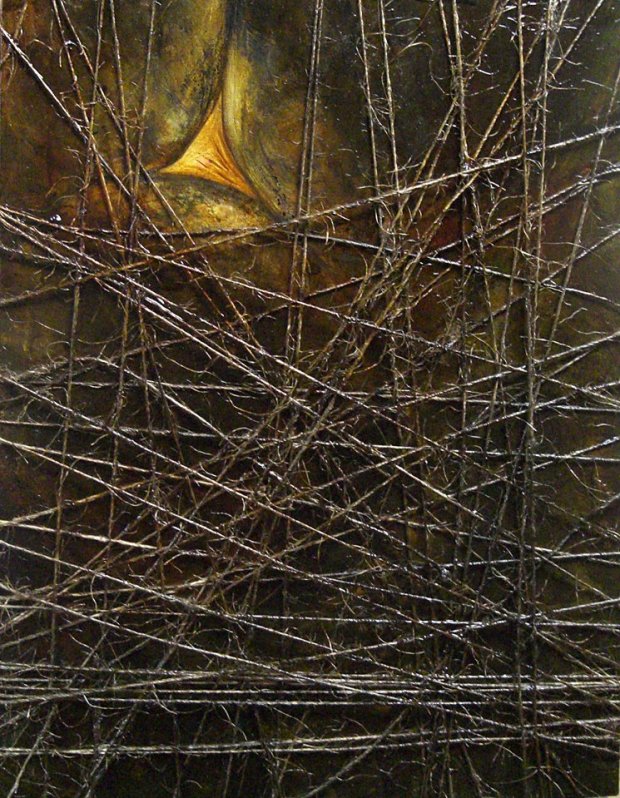 In 2007, I found myself back in the studio in search of a personal metaphor for my experience. The grief of injustice threatened the light that was my faith and I felt completely bound in that place. It seemed that there was nothing that could be done to clear the space and so once more I took up a ball of string, reclaiming this material to articulate my experience. Once again I was making small work and when it was complete I was satisfied. I did not have the words to articulate how I felt and thought about injustice and grief, but in the image I was able to really see the weight and the reality of my own experience. As I pondered the image in the years that followed, I sometimes wondered if the small gap where the light gets into this image was indeed a wound. In the absence of professional attention and support, I think that I resorted to using string to bind the wound … but it was interesting to note that I had allowed the wound to remain open as a rift in my conceptual thinking. 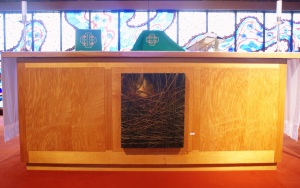 I carried this open-and-yet-contained wound for years, even allowing it to find its place for a time on the altar in the church where I had been a child. Having been absent from this place for the previous thirty years, I was stunned to see how well the proportions and the toning of the image worked with the altar. Indeed, the wire at the rear of the painting hung over the carved symbol IHS that decorated the front of the altar.

The invitation to hang this work in this way was an offering of incredible generosity and love. There was a risk that people may be offended. And yet, the courage to enter this risk meant that Christ was able to literally bear my grief in sacrificial offering. I would never be able to see the painting ‘Grief’ in the same way again.

Seven years later, my relationship with this grief had shifted along with my experience of injustice. Finding a voice to speak of these things had been slow and arduous but having taken one step at a time, seven years later I was in a different place. I knew in my bones that things had shifted, but I needed to see for myself if this was true. It was time to do some work with the painting I had known as ‘Grief’. It was time to do some more with string. This time I was not binding or winding. This time I took to the string with scissors, releasing that which had been bound in the hope that I would find a new metaphor. As I worked at cutting I collected the small pieces of string that had long since hardened with the varnish that had finished the oil paint on canvas. I worked over several weeks to open the space with care and attention. I even used some of the older string to tie back the threads that threatened to reach back into the centre and encroach on this newly-born place. Eventually, I tied some of the shorter pieces of string together and they reminded me of firewood carefully collected and waiting for the time when it would be most needed. The last thing that I did was to take to this older oil painting with white gouache and in doing so I quickly discovered marks that reminded me of a membrane as it opens toward the moment of birth.

I shared this new image with my psychotherapist free from any narrative and he saw the nest of an eagle, perched high on a rocky outcrop. I was intrigued and delighted to hear this. Is this is the gift of a new metaphor or the extension and natural development of a metaphor that has always been.

How long indeed, is a piece of string? 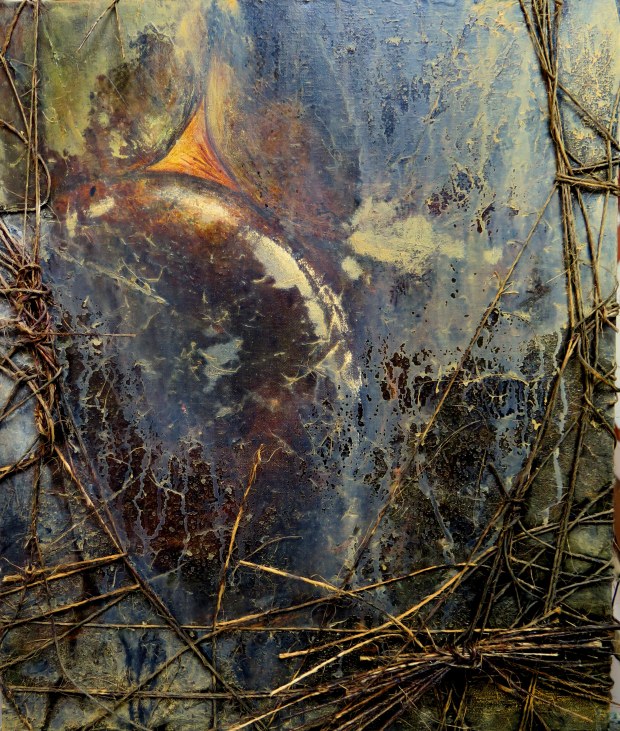