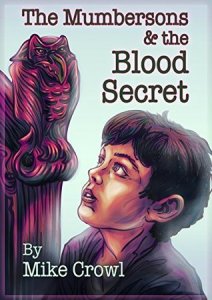 Some moons ago, I posted an interview with the Dunedin author, composer, and musician, Mike Crowl, in relation to his book, Diary of a Prostate Wimp. Mike is a good friend who has, besides his literary foray on his surgical experiences, published two fantasy books this year for children. One of these was based on a really delightful musical he wrote and produced in 2012, called Grimhilda! (I posted about it here). This month, Mike released a ‘sort of sequel’ to Grimhilda! called The Mumbersons and the Blood Secret.

The Mumbersons is a ‘sort of sequel’ because here new characters take the lead, and only a very few of the people from the first book appear. It’s an approach not unlike that which C. S. Lewis adopts in his Narnia series. The Horse and the Boy, for example, has distinct connections to the earlier book, The Lion, the Witch and the Wardrobe, but the characters driving the tale are quite new.

Mike’s fantasy world, like Lewis’s, isn’t explicitly ‘Christian’, although much of the strange new world of the Bible underpins the stories. In Grimhilda!, for example, the parents of a young boy called Toby are kidnapped by a witch, who later explains that she’s entitled to do this because they haven’t loved their son; they’ve been too busy with their own lives. After some initial reluctance, Toby sets out with some companions to rescue his parents. In the background to the story we learn of another young boy who tried to do the same thing many years before, and failed, dying in the process. This past sacrifice makes possible Toby’s new life of loving service.

And then there’s the blood. Indeed, a main thrust of the new story is about the secret of Billy’s blood, and whether it can be used for good or evil.

Both stories are adventures, with the heroes having to overcome a number of difficulties, sometimes by their own strengths, sometimes aided by the unlikeliest of gifts. In each story, the boy is accompanied by a female companion: in Grimhilda! she’s a bossy doll who’s come to life; in The Mumbersons, she’s a risk-taking girl with a rather strange family background.

Like the other two books, The Mumbersons and the Blood Secret has been published as an e-book. (It’s available on Kindle, Kobo, iTunes, and Smashwords. It’ll also soon be available at the Dunedin Public Library.) And, again, Mike has worked closely with Cherianne Parks, his co-author, whose ideas ‘permeate the story’, as he notes in the Acknowledgements. You can read more about Mike here.

It isn’t necessary to have read Grimhilda! to understand the new book. Although, of course, knowing the background of the earlier story will add to the enjoyment of the sequel.

Congratulations to Mike on this latest publication. It’s good to see that he’s relaxing in that most unbiblical of modern concepts – retirement!