I met you yesterday. It was the first time. I thought you were a god. It was your long smooth back. Long, even longer than Ingrid Bergman’s, and marked by as much pulchritude. Or was it that voice—so confident, and free? Or the way you greeted friends and strangers, sojourners and indifferents alike, and me?

I asked many locals about you. Only one even knew your name. And where I thought you exotic, they named you ‘common’. Where I named you ‘generous’ and ‘kind’, they called you ‘scavenger’, and ‘crow like’, and ‘a varmint’, at one time even in the same breath.

But they do not see you as I do. Most do not see you at all. Not on 6th Street East, anyway—on 6th Street East where they even named a bar after you once; one of those hipster ‘Sorry, No Kids’ joints all caged in like a jail full of lost souls playing the jukebox and bad darts. But no saloon here could produce anything near matching the magnificence of your song. Down the road in Fort Worth, they named an art gallery after you, and a couple of guys from LA, Ken Neufeld and Scott Guy, teamed up to write a little love song, ‘for 8-part mixed voices’, about you … but not here, not here in this music mecca of the desert with its Willie Nelson Boulevard.

But it was given to one guy—an out-of-towner who loves the Liverpool Football Club and the New England Patriots (not an entirely unacceptable combination) and Irish beer and blond middle-aged women and Ben & Jerry’s—‘Vermont’s Finest’—ice cream (the Cake Batter is his favourite)—to introduce us. And with the help of a smartphone—smart, I assume, because it knew of you—was able to tell us both your full name, and about your dietary habits, and about your mating patterns. 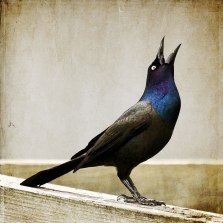 ‘She’s a grackle’, he said. ‘A quiscalus quiscula’. ‘Ah, a grackle’, I said with a sense of great accomplishment; for my pursuit was near over. And, knowing your name, I was filled with wonder ever more.

And later, when I was eating outside at La Condesa, you were there too—did you follow me?—striding elegantly around my table while I enjoyed my platos fuertes of mole dominguero (seared airline chicken breast, three day mole, grilled green beans, crema) and my Austin Beerworks Pearl-Snap German-style pils. You seemed to welcome my worship. You seemed unbothered by the crowds, those masses whose anthem was ‘Save the grackle, my ass!’. You seemed more aware than all of us of the sun’s setting. And you won me again with your song, and that long blue back.

And as I wandered back along Guadalupe Street, from 2nd up to 27th, I was greeted by what seemed like all your mates—an entire grackle orchestra, playing, free of charge in the trees outside the University Baptist Church whose current edifice was erected in 1921 (when the Reverend A. L. Aulick was kicking about doing his thing) and is now ‘listed in the National Register of Historic Places by the United States Department of the Interior’. And I thought, stuff the Department and its register. The end and the beginning of all things—interior and exterior and posterior—was being played out right here, right in these trees above the pavement outside ‘Austin’s Progressive voice of faith’, the music which was, with great success, drowning out all the traffic with which the new creation is joyously unfamiliar. 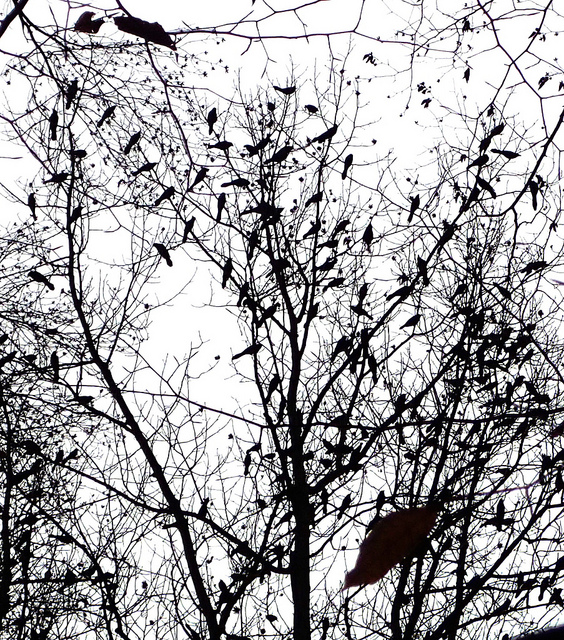 I’m not, it seems, the only grackle worshipper here in Austin. Sophie Gilbert, a wildlife researcher, educator, and PhD student at the University of Alaska Fairbanks, has created a video, ‘Shrieks of Joy: The Grackles of Austin’, and has posted it just last week: