‘The Clod and the Pebble’

‘Love seeketh not itself to please,
Nor for itself hath any care,
But for another gives its ease,
And builds a heaven in hell’s despair.’

So sung a little clod of clay,
Trodden with the cattle’s feet,
But a pebble of the brook
Warbled out these metres meet:

‘Love seeketh only Self to please,
To bind another to its delight,
Joys in another’s loss of ease,
And builds a hell in heaven’s despite.’ 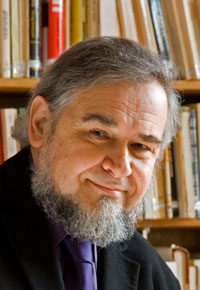 In his public lecture at the recent ANZATS Conference in Melbourne, Paul Fiddes, one of the most stimulating theologians writing today, considered three literary giants – William Shakespeare, William Blake and TS Eliot. He argued that for Blake, eternity is about the wholeness of persons under the aegis of imagination and forgiveness, and that imagination petrifies when reason casts its laws upon it. Of Eliot’s work, Professor Fiddes drew attention to the notion of eternity as the healing of time, and as that which overcomes the division between past, present and future. We were reminded, and that with eloquence typical of the speaker, that God holds and heals the past, the present and the future in the transforming presence of love, and that we never escape from time but time can bring us into a new sphere of love.

These are themes with have much occupied Fiddes’ thought in recent years (see, for example, The Creative Suffering of God, The Promised End: Eschatology in Theology and Literature and Freedom and Limit: A Dialogue Between Literature and Christian Doctrine), and around which he is due to lecture further this year. He will be a keynote speaker at ‘The Power of the Word: Poetry, Theology and Life’, a conference held jointly between Heythrop College and the Institute of English Studies, and at the 2010 Biennial Conference of the International Society for Religion, Literature and Culture, to be held at St Catherine’s College, Oxford, between 23–26 September 2010 around the theme ‘Attending to the Other: Critical Theory and Spiritual Practice’.

‘Have you an infant child? … You have no need of amulets or incantations, with which the Devil also comes in, stealing worship from God for himself in the minds of vainer men. Give your child the Trinity, that great and noble Guard’. – Gregory of Nazianzus, Oration 15, 365.

‘Worship the Trinity, which I call the only true devotion and saving doctrine’. – Gregory of Nazianzus, Oration 43, 405.

‘The impotence of which many complain in the Church of the hour is not unconnected with the relegation of the doctrine of the Trinity to a theological appendix, even when it is not denied … And, on the other hand, the joy and the up–lifting that we have in meditating on the revealed depths of the Triune God is part of the blessedness which is the Church’s consummation; and it gives us that self–possession of the holy which both inspires and preserves us among our best activities for man’s weal. Such a doctrine, full as it is of difficulties for mere thought, when it is taken with serious depth by a Church of faith answers more difficulties than it creates. And such truth should be matter of adoration rather than criticism to an intelligence which is not merely exercised in speculation, but itself converted to the manner and movement of the Eternal Mind as it is revealed in Christ’. – PT Forsyth, The Principle of Authority, 230-1.

‘Not although God is Father and Son, but because God is Father and Son, unity exists [in the Godhead]. So God, as He who establishes Himself, who exists through Himself, as God in His deity, is in Himself different and yet in Himself alike. And for that very reason He is not lonely in Himself. He does not need the world. All the riches of life, all fullness of action and community exists in Himself, since He is the Triune [One]. He is movement and He is rest. Hence it can be claimed to us that all that He is on our behalf – that He is the Creator, that He has given us Himself in Jesus Christ and that He has united us to Himself in the Holy Spirit – is His free grace, the overflow of His fullness. Not owed to us, but overflowing mercy!’ – Karl Barth, Dogmatics in Outline, 44.

The Painting: William Blake’s, ‘The Sketch of the Trinity’. God the Father, under the wings of the dove-like Holy Ghost, accepts the Son’s offer to give his life for man. The figure of Satan hovers below the clouds. Image taken from Notebook of William Blake. Originally published/produced in England; circa 1787-1818.

Although the text of the Hebrew Bible reveals that Israel’s God is referred to by a number of epithets, names and titles, OT scholars are quick to assert that this is an indication of the development in Israelite religion. So just as there was a move to use the divine name (YHWH) at one time in Israel’s history to distinguish YHWH from the other gods, there also came a time when this move was reversed. Rose notes that ‘the loss of this obviousness of a living relationship with God is compensated by an explicit confession of faith’, of which he cites as an example Deuteronomy 6–16. There seems to be two reasons for this: (i) the name as a distinguishing mark was no longer necessary; and (ii) the later Jewish custom of not pronouncing the name at all for fear of violating the Third Commandment. This is evident especially in the postexilic texts (for example, Esther, Song of Songs and Ecclesiastes do not use the name ‘YHWH’ at all.) Although YHWH was still considered the only God, the use of ‘Elohim’ became synonymous with, and often replaced, ‘YHWH’.

Furthermore, Baumgarten notes that ‘Among the Essenes the awe surrounding the divine name was apparently extreme. It appears also to have carried over to other sacrosanct names, such as those of the angels and that of the lawgiver, “any blasphemer of whom is punished with death” (Josephus, War 2.142 and 145). This tendency was not, however, confined to the Essenes, as is evidenced by the complaint of a “Galilean heretic” against the Pharisees for permitting the names of pagan rulers to be written in the same document with the name of Moses (mYad 4.8).’

Coffin notes that in the post-exilic prophets and in the later historical books the holiness of the divine nature continues to be emphasised and the sin of profanity to be condemned. Any word or deed that seems to detract from the glory due to God or to manifest a disposition to deprive him of the honor rightly belonging to him, is deprecated. Since Israel is his people, any act that tends to minimise his exalted character as their God is profanity. This was made evident in the growing sanctity of the divine name and the increasing tendency to drop the use of it altogether and replace it with Elohim.

This raises the question, as we shall see, of how Jesus understood the divine name, and whether or not he reinvented it, as did Qumran, to serve Israel’s use and his divine mission. The answer to this question awaits a future post …

The Painting: William Blake’s ‘Elohim Creating Adam’ (1795/circa 1805). For Blake the OT God was a false god. He believed the Fall took place not in the Garden of Eden, but at the time of creation shown here, when Adam was dragged from the spiritual realm and made material.