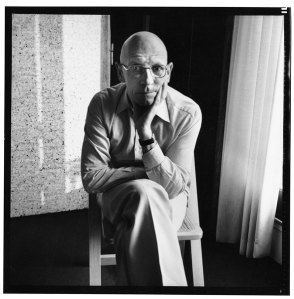 While slowly working through a growing backlog of podcasts on my iPod, I happened upon this fascinating conversation (available as transcript and audio) with Justin Clemens about Michel Foucault and his Madness and Civilization: A History of Insanity in the Age of Reason.

One of the things that Foucault argues specifically about what happens to madness in the 17th century is that it suffers a ‘great confinement’ as he calls it, an exclusion and incarceration whereby people who we would now denominate mad are locked up higgeldy-piggeldy with an enormous number of other sorts of types, like beggars, petty criminals, layabouts, prostitutes, and so on. And he wants to ask us to the provenance or historical anticipations of this great confinement. He finds this in the great leprosaria of the mediaeval period, and he draws that connection first of all in order to show yes there have been these techniques before in the history of the West, certainly, but then that the great confinement that he’s talking about vis-à-vis madness in these other forms, it’s not quite the repetition, something different is going on, and it’s kind of a bravura Foucault performance again …

I think that Foucault was actually desperately trying to de-philosophise. One of his critiques of Derrida is that Derrida is just a kind of part of a well-determined little pedagoguery of a very exclusive, prestigious, small, small-minded, philosophical discourse that actually in its obsession with the great texts of the masters, fails to recognise its links to society and actually what happens in society is registered in philosophy, in its dissimulating way. And so much of Foucalt’s life it seems to me, is desperately trying to not be a philosopher in a classical model, but to try and be (to use a word he didn’t mind himself) a real intellectual, to question philosophy, history, psychiatry, medicine, prisons and so on, sexuality, in a way that returns them a kind of deranging and alienated force and makes you think about them again in ways that either historians wouldn’t have made you think about again, and/or philosophers wouldn’t have made you think again. So Foucault’s I think tries to make you think again.

This BBC podcast packs in discussion on GAFCON, Mormon online clothing shops, an insightful interview with Hans Küng (this starts at around the 24 minute mark), public funding to faith organisations, and women bishops.

The 2006 New College Lectures – Children in the Spotlight: Issues in Early Childhood and Parenting – are now available.

Kevin has a nice post on Barth’s ongoing legacy, including a quote from Neuhaus in which he recalls Jarislav Pelikan’s identification of ‘the most influential theological mind of the past two hundred years’ as John Henry Newman. Why? ‘Newman’s thought has been received into the tradition of the Catholic Church, whereas Schleiermacher and Harnack, brilliant though they were, wrote against the tradition, and Barth was, as he claimed to be, a “church theologian” but a church theologian without a church capable of bearing his contribution through successive generations. Pelikan understood, as Wilken said at Yale, that it is orthodoxy that is the most consequential, the most adaptable, the most enduring.”‘ Read the full post here.

Byron notes some great words from C.S. Lewis on forgiveness.

Travis generously shares with us his notes from Eberhard Busch’s fascinating lecture at Princeton entitled, ‘A Swiss Voice: The Campaign of the Swiss Government Against the Voice of Karl Barth During the Second World War’. In the lecture, Busch introduces us to some largely ignored documentation from the Swiss and German governments during WWII. He writes,

‘The Swiss government slowly began tightening its grip on critical publication, classifying some of Barth’s lectures as political instigation. Organs of the Swiss government even described Barth as a ‘theologian of hate,’ and he was accused of political agitation against Germany under the cover of religion. The two kingdoms doctrine was even marshaled against Barth, and he was told that he could say whatever he wanted about theology but that he couldn’t give political lectures under the guise of ecclesial style. The publication of certain of Barth’s published lectures and booklets was forbidden. Barth contested these things, arguing that the theologians of the Reformed church in the tradition of Calvin and Zwingli have not only the right but the duty to speak politically. When his appeal failed, Barth was unable to publish or lecture on the political situation in Switzerland. Barth’s phone was tapped, and his correspondence was monitored and censured. In one instance, one of Barth’s letters, including a picture of him in his military uniform bearing the caption ‘Resist the evil with all means,’ was confiscated’.

After spending an afternoon sifting through an ‘impressive pile’ of his old sermons (30 worth worth!), Jim asks ‘When is a sermon past its use by date?‘ After reminding us that his hero James Denney claimed to have burned all his sermons when he left Broughty Ferry in 1897 (‘but fortunately there’s still a few hundred of them so he must only have burned the ones he thought unpreachable elsewhere’), Jim invites us to reflect on two fair questions: 1. What criteria should be used to decide if a sermon preached in the past is worth keeping now? And 2. Should an old sermon ever be re-cycled?

Scott announces the start of a mini-series on the Trinitarian thought of Henry of Ghent. He asks, somewhat provocatively, ‘We know there are three persons, and one ‘substance’/’ousia’ from Scripture and our orthodox Creeds, but is there anything that we could say that might account for why there are three, and not say five divine persons? Or even, why not say there is a potential infinity of divine persons (on some contestable account of the deification of believers)? You get my point. Why three divine persons and what makes it that there are three, no more and no less?’

The ABC’s ‘Religion Report’ makes available via podcast a recent discussion on the Australian Christian Lobby’s invitation to election candidates to justify why they are ‘worthy of the “so-called” Christian vote’.

While on podcasts, there’s a download available here of ‘Tractatus Logico-Philosophicus’ by Ludwig Wittgenstein, and this one on ‘The Emptiness of Existence’ by Arthur Schopenhauer.

Hamelife has a beautiful wee post here on giving our kids enough time to nut things out, process information and respond.

… sometimes parents just need to give their child enough time to let the cogs turn, to allow a moment to process the information. Those few more seconds might take some patience on our behalf, but they could be absolutely priceless when it comes to our child’s personal development. Their little minds going over the words, processing what they mean, deciding what to do. I wonder if when parents hurry their children up, push them out the door, they deny them the opportunity to do that … Parents seem to be under increasing pressure these days, run off their feet. In the choice between the quick hit or the slow release it might feel like we have no time to go for the lengthier option. But in the long run, when they look back, parents might be glad that they extended just a little bit more time to their children, time to allow the cogs to turn.

There’s also a good podcast here on Family Values in The Simpsons and one here on Steiner Schools and a discussion on whether public schools are as good as private schools.

Here’s a few more podcasts that I’ve checked out today that I thought were worth sharing here:

With the rise of the internet many parents are feelings that their kids know more about what goes on in the world wide web than they do. And with community like websites, danger for them is no longer just in the neighbourhood. In this podcast, Paul Wallbank of PC Rescue maps out some of the dangers of cyberspace.

In this podcast on living with drug and alcohol abuse in families, Shirley Smith, author of Set Yourself Free, talks about how we can help people with addictions or overcome our own. All of us know someone with a problem with addiction and it can create chaos in a lot of lives.

The first 9 minutes of this podcast includes a discussion on Boys, Men, and Fathers.

This podcast includes a discussion on reading to your children, this one and this one are discussions on co-parenting and reading to kids, while this one is on Single-sex schools.

This podcast includes an argument for co-ed schools, and this one’s on Political wives, Intensive parenting, and Maths for pre-schoolers.

There’s a discussion here on Kids and Money too, and one here on ‘From Babies to Blokes: The Making of Men’.

So that ought to keep us all busy for a wee while. I usually download podcasts to my MP3 player and listen to them at night while I fall asleep.

Just been listening to this podcast on Universal preschool, Maths for preschoolers and Reading to your children

On Universal preschool (00:00), the argument is that Preschool is the cornerstone of education – everything else is built upon it. That’s what David Kirp has been telling Australias biggest and most profitable childcare company, ABC Learning. Universal preschool is something both major parties have talked about in Australia, but free preschool for all 3 and 4 year olds seems a very long way off  though South Australia is probably furthest along the track

On Maths (00:14) for preschoolers, it’s usually assumed that kids don’t start learning too much in the way of mathematics until they start school. Sure they read the odd counting book, or know how many feet they have, but despite the lack of formal learning, pre-school kids actually know a lot more about maths than you might think. Brian Doig has been looking at what sort of mathematical knowledge pre-schoolers have and how everyday tasks are a major part of developing that knowledge.

On Reading to your children (00:22), whilst studying children’s language development, Susan Colmar found that there are a few key things parents should and should not do when they read to kids. One of her project’s focused on 15 mainly 3-5 year old pre-schoolers with language delay. After their parents made a few tweaks to how and how often they read to their children, there was a significant increase in their language skills.

We’re not up to even thinking about pre-school stuff yet, but I’d be keen to hear what your thoughts are on what is being said in this podcast.