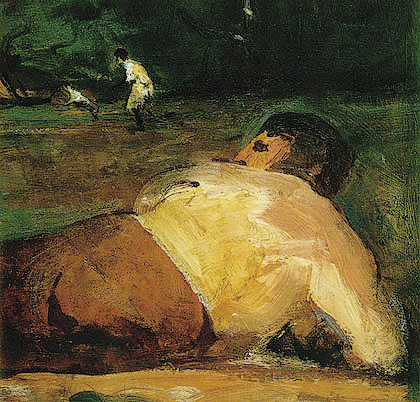 While preparing some lectures recently on theology and the arts, I was struck again by one limitation that both art and Christian theology share – namely, the impossibility of absolute innovation. As Rowan Williams noted, ‘To add to the world, to extend the world and its possibilities, the artist [like the theologian] has no option but to take his [or her] material from the world as it is’. Even our best attempts at liberation from words, from the determinations of human language and imaginings, can only carry us so far as we are brought to what Williams calls ‘a complete imaginative void, the dark night of an utter alienation from the “available” world, “the desert of the heart”’.

Still, the human response of taking up ‘material from the world as it is’ does not obviate the truth that the world is God’s, nor suggest that God ‘“made something” and then wondered what to do with it’. Rather, as Ruth Etchells puts it in A Model of Making: Literary Criticism and its Theology, ‘from the first the creative purpose was one of profound and secure relationship’. And, it seems, if such a relationship is to be truly characterised by love, then its prime instigator will also create ‘room’ for creation to be itself. In other words, God’s love achieves its end not through brute force but by patient regard for what Emmanuel Levinas termed the ‘otherness of the other’. To be sure, God never retreats from creation into some kind of self-imposed impotence, but rather remains unswervingly faithful, interested and involved in all that goes on. But this is not to suggest that all is, so to speak, in order. And so Christians, when they speak of creation, will want to speak, as many physicists too will want to do, not only of creation’s order and but also of its disorder, not only about its being but also about its becoming, and about the space that God has granted the world, space which implies some risk, and which can neither be ignored nor annihilated if all there is is to be brought to love telos; i.e., to all that ‘God has prepared for those who love him’ (1 Cor 2.9).

Not a few scholars and practitioners are now talking about the sense in which art serves to make this space meaningful, and of the way that art is concerned to transform created things, to improve creation, to add value to creation, to, in Auden’s words, ‘make a vineyard of the curse’. J.R.R Tolkien understood this well, as his fairy stories and indeed his entire project of mythopoesis attest his concern to not merely ennoble, challenge and inspire, but also to heighten reality itself, to invite us to look again at familiar things, and see them as if for the first time. Jacques Maritain, too, in Creative Intuition in Art and Poetry, once wrote that ‘Things are not only what they are. They ceaselessly pass beyond themselves, and give more than they have …’. In other words, it is claimed that there is absolutely nothing passive going on when a painter picks up a piece of charcoal, or a dancer performs Swan Lake. Abraham Kuyper was right to insist in his 1898 Stone lectures that art ‘discover[s] in those natural forms the order of the beautiful, and … produce[s] a beautiful world that transcends the beautiful of nature’. And others, too, have spoken of the way that the arts contribute to the transformation of disorder, bearing witness to the belief that creation is not indispensable to God’s liberating purposes for all that God has made, purposes which point not to a return to a paradise lost but to a creation made new, a making new which apprehends the reality of human artistry and which proceeds in the hope that both the location and the vocation of the children of God is inseparable from creation itself.