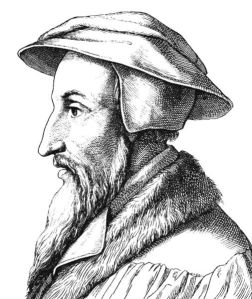 Firstly, don’t forget to enter the Who said it? competition. It closes on Friday. Suggestions so far have been fascinating.

Now, enjoy this post by Michael Jinkins on ‘Myths and urban legends about John Calvin’:

Recently I asked Serene Jones, president of Union Theological Seminary in New York, what resources she finds particularly helpful in her vocation as a theological educator and church leader. She said, “This may sound corny, but John Calvin.” I don’t think she sounds corny at all, but, then, I’m a Calvinist. Or a Neo-Calvinist. Or maybe a Crypto-Neo-Calvinist. Anyway I agree with Serene – and with David Steinmetz writing for “Faith & Leadership” here.

This year we Calvinists have been busy baking birthday cakes with 500 candles on them in honor of John Calvin whose influence has been noted, lamented or celebrated by figures as divergent as the sociologist and economist Max Weber, the journalist G. K. Chesterton and the novelist Marilynne Robinson. As a public service to all non-Calvinists, I have assembled a myth-busting primer on the Protestant Reformer.

Myth No.1: John Calvin was a sour puss.

Martin Luther is usually cast as the fun-loving, beer-swigging, warm-hearted Reformer while Calvin is caricatured as dour, the sort of person who (as one Episcopal bishop once notoriously described him) “sucked sour persimmons for fun.” In fact, Calvin was the Reformation’s chief apologist for fun. For example, he reminds us that God created food and drink “for delight and good cheer,” not simply for nourishment. Quoting the Psalms he tells us that wine is given to us to gladden the heart, and olive oil was made for dipping bread. Here’s a person who knew his way around a Michelin Star restaurant (never forget that Calvin was French!). According to Calvin, God did not create the world merely for utilitarian purposes, but for beauty and pleasure.

Myth No.2: Calvin was a tyrant.

Recently this myth got some highly visible air time in “The New York Times Magazine” in an article titled: “Who Would Jesus Smack Down?” The article profiled a preacher who justifies his refusal to listen to the criticism of lay leaders by citing Calvin. When a member of his congregation complained, for example, the pastor suspended the complainer’s membership, explaining, “They were sinning through questioning.” The author of the article commented, “John Calvin couldn’t have said it better himself.” In fact, Calvin could and often did say it much better than that. Calvin distrusted the vesting of power in any individual (himself included), and abided with decisions made by the ordered bodies of his church and city even when he did not agree with them. Calvin believed that God makes God’s will known through groups more reliably than through the will of individuals, and there’s no better guarantee against the abuse of a leader’s power than a vigilant group in which authority is shared.

Myth No.3: Calvin and Calvinism are identical.

This one’s tricky! There’s an assumption that everything we call “Calvinism” actually came from Calvin. A colleague recently mentioned that he was sitting on a plane reading a book about Calvin. The flight attendant saw what he was reading and said, “I know about Calvin. He’s the TULIP guy.” In fact, the well-known “five points of Calvinism,” memorialized in the acronym TULIP (Total depravity; Unconditional election; Limited atonement; Irresistible grace; Perseverance of the saints) dates from the century after Calvin (the Synod of Dort, 1618-1619), and represents the high water mark of “Calvinist Scholasticism” in which the warm personal evangelical movement that Calvin led was distorted by a calcified reactionism. Calvin scholars like James Torrance and T.F. Torrance, R. T. Kendall and Holmes Rolston, III, have helped us differentiate between Calvin and his latter-day disciples.

Myth No. 4: Calvin was a religious fanatic.

There certainly is a popular perception of Calvin as a sort of religious fanatic or zealot. After all, there are some Christian Fundamentalists to this day who claim him as their spiritual father, and let’s not forget the various heresy prosecutions that have followed in the wake of “Calvinism” especially in Scotland and the United States. In fact, Calvin himself deserves to be remembered both as a “Renaissance Man” and a “Humanist.” Calvin was part of that remarkable Renaissance movement that included Thomas More (the brilliant Catholic “Man for all Seasons”) and Desiderius Erasmus (the Dutch scholar known for his critical studies and satire). The humanist movement swept away the cobwebs of superstition and obscurantism and placed the Bible, freshly translated, in the hands of ordinary Christians. Calvin, like other humanists, was also a critical scholar of the Bible who believed that knowledge and wisdom, scholarship and science are not enemies of the faith.

Myth No. 5: Calvin was sadistic.

Obviously this myth is supported by the burning of Michael Servetus (a person who had the distinction of being considered a heretic by both the Protestants and the Roman Catholics and of being a physician who discovered how blood circulates in the human body). Calvin opposed Servetus’s teachings. Calvin denounced him to the Roman Catholic Inquisition. Calvin believed that Servetus’s heresies were dangerous to the future of the Church, and he wanted him silenced. In fact, however, what is less well known is that Calvin argued that Servetus not be burned at the stake. The conventional picture of Calvin cruelly twirling his moustache like Snidely Whiplash while Servetus burned is baseless. Calvin urged the courts to spare Servetus from burning, which Calvin considered a barbarous method of execution – and to behead Servetus instead. Okay, this one sounds like cold comfort even to me, and even if Calvin thought Servetus “had it coming” (to quote Clint Eastwood). The fact that Calvin believed the church was locked in a life and death struggle with Servetus, and that the magistrates had no other responsible alternative than to execute him, does not necessarily mean that Calvin was sadistic, though he does appear to have been a pretty typical product of a cruel age on this score. The burning of Servetus ignited a firestorm of controversy among Protestants as to whether such measures are ever justified. Incidentally, Servetus was opposed to the use of force to promote religion long before he was sentenced to death.