'The Young Calvin', by Oliver Crisp

Children take on a ‘largely symbolic character’ in most of Calvin’s writings wherein children are viewed as ‘metaphor for the religious life of adult Christians’.[1] Unlike Luther, Calvin tells us very little about his encounters with children. He does, however, tell us that he and his wife lost their only biological child: ‘God had given me a little boy. God took [him] away’.[2] We know little about his relationship with the two children from his wife’s first marriage aside from his pledge (on her deathbed) to care for them; or about the children of his brother Antoine, who lived in his household.

Calvin was not, however, indifferent to children. So Pitkin:

[Calvin’s] writings, along with the social and ecclesial changes he participated in and sought to effect, bear witness to the importance of children in church and society. Serious implications for children’s lives and important assumptions about their nature emerge in his radically theocentric theology of grace, especially in his understandings of providence, covenant, baptism, and human nature as created and fallen. Moreover, when one takes into account the full range of his reforming activity, especially his preparation of ordinances for regulation of the Genevan church (1541), his two catechisms (1537 and 1541-2), and his promotion of school reforms in Geneva, it becomes clear that Calvin, like many intellectuals and reformers of his day, was intensely interested in children and child rearing.[3]

There are multiple ways to approach Calvin’s thought on children, one of which is via his thinking on election: ‘the elect are from birth full inheritors of God’s covenant and members in the church’.[4] Another profitable avenue is via Calvin’s thinking on God’s providence. For Calvin, all human life exists under divine providence; children, therefore, are not ‘begotten … by a secret instinct of nature’ or the ‘fruit of chance’ but are gifts of God.[5] So even when he lost his only son (child mortality at the time ranged between 30 and 50 percent), he would write (to Pierre Viret):

The Lord has certainly inflicted a severe and bitter wound in the death of our infant son. But he is himself a Father, and knows best what is good for his children.[6]

Providence does not equate to laxness, however, and Calvin took seriously the responsibility of parents (indeed, it was a coordinated effort of family, state and church)[7] in rearing children:

… unless men regard their children as the gift of God, they are careless and reluctant in providing for their support, just as on the other hand this knowledge contributes in a very eminent degree to encourage them in bringing up their offspring. Farther, he who thus reflects upon the goodness of God in giving him children, will readily and with a settled mind look for the continuance of God’s grace; and although he may have but a small inheritance to leave them, he will not be unduly careful on that account.[8]

And what sort of children ought parents wish for?

… the children which we ought to wish for, are not such as may violently oppress the wretched and suffering, or overreach others by craft and deceit, or accumulate great riches by unlawful means, or acquire for themselves tyrannical authority, but such as will practice uprightness, and be willing to live in obedience to the laws, and prepared to render an account of their life. Farther, although fathers ought diligently to form their children under a system of holy discipline, yet let them remember that they will never succeed in attaining the object aimed at, save by the pure and special grace of God.[9]

Associated with this is the duty of Christian parents to baptise their children. ‘Parents ought to consider that children in the home constitute a “mirror of God’s grace,” a sign that God cares for the family, and from this consideration be moved to fulfil their parental obligations’.[10] Unlike some, Calvin did not believe that baptism was strictly necessary for salvation. Salvation depends entirely on the promise of God in God’s word, and not on the sign of that promise. Christian parents, therefore, have a duty to baptise their children, but should not worry about the fate of children who die unbaptised.

Calvin takes all authority – parental and otherwise – with the utmost seriousness. But where parents lead their children to violate God’s law, ‘children should regard them not as parents but as strangers’.[11]

Like many of his contemporaries and predecessors, Calvin divides childhood up into three stages, each lasting about 7 years.

[Jesus] holds up to them a little child as an emblem of humility. When he enjoins his followers to become like a child, this does not extend indiscriminately to all points. We know that in children there are many things faulty; and accordingly Paul bids us be children, not in understanding, but in malice, (1 Cor. xiv. 20;) and in another passage he exhorts us to strive to reach the state of a perfect man, (Eph. iv. 13). But as children know nothing about being preferred to each other, or about contending for the highest rank, Christ desires that their example should banish from the minds of his followers those eager longings after distinction … It will perhaps be objected, that children, even from the womb, have a native pride, which leads them to desire the highest honor and distinction; but the reply is obvious, that comparisons must not be too closely or too exactly carried out, so as to apply at all points. The tender age of little children is distinguished by simplicity to such an extent, that they are unacquainted with the degrees of honor, and with all the incentives to pride; so that they are properly and justly held out by Christ as an example’.[12]

Based on Psalm 8:2, Calvin considers young infants [those still nursing] as mature proclaimers of God’s goodness: ‘[David] says that babes and sucklings are advocates sufficiently powerful to vindicate the providence of God. Why does he not entrust this business to men, but to show that the tongues of infants, even before they are able to pronounce a single word, speak loudly and distinctly in commendation of God’s liberality towards the human race?’.[13]

These comments are remarkable given that Calvin’s stress on sin’s noetic effects. This statement remained unchanged from the 1536 Edition of the Institutes:

Even infants bear their condemnation with them from their mother’s womb; for, though they have not yet brought forth the fruits of their own iniquity, they have the seed enclosed within themselves. Indeed, their whole nature is a seed of sin; thus it cannot but be hateful and abominable to God. Through baptism, believers are assured that this condemnation has been removed and withdrawn from them, since (as was said) the Lord promises us by this sign that full and complete remission has been made, both of the guilt that should have been imputed to us, and of the punishment that we ought to have undergone because of the guilt.[14]

Infancy ends with the onset of reason, at about age six. 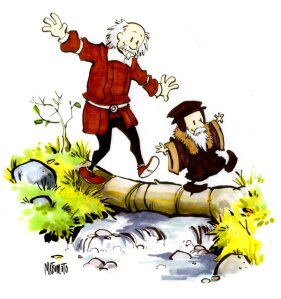 7-14     A period of intellectual, spiritual and moral maturation.

So Calvin, on 1 Corinthians 13:11 [‘When I was a child, I talked like a child, I thought like a child, I reasoned like a child. When I became a man, I put childish ways behind me’], insists on the necessity of education for childhood, but which does not suit those who have already reached ‘maturity’ (Latin commentary) or the ‘age of discretion’ (French commentary). The awakening of reason involves a lapse from the earlier simplicity. Consider Calvin’s comments on Genesis 8:21 [‘The LORD smelled the pleasing aroma and said in his heart: “Never again will I curse the ground because of human beings, even though every inclination of the human heart is evil from childhood [from youth]. And never again will I destroy all living creatures, as I have done’]:

… the clause which is added, “from youth”, more fully declares that men are born evil; in order to show that, as soon as they are of an age to begin to form thoughts, they have radical corruption of mind.[15]

Again from his comments on Psalm 8:2,

If God has appointed children even in infancy the vindicators of his glory, there is no absurdity in his making them the instruments of showing forth his praise by their tongues after they have arrived at the age of seven years and upwards.[16]

Education/instruction was at the forefront of the Church’s/parents’ responsibility towards children. Calvin taught (and practised) and that before a child was admitted to the Lord’s Supper at about age 11 or 12, they underwent weekly catechism classes (based on 52 question-and-answer format questions on nature of faith, the Creed, the Law, prayer, worship, Word and Sacraments) and learnt to sing the psalms. The assumption throughout, however, was that the child (indeed all children and not only those of Christian parents, because one could not know who the elect were) was to be treated as fully Christian (by virtue of the one covenant) and not as an object for conversion. 7-14-year-olds also had to give a public confession of their faith before the congregation. The confession proceeded an oral interview with a pastor and involved a brief verbal testimony. The catechism classes were not with a view to rote learning of answers but with a view to providing young catechumens with a vocabulary for articulating their growing faith.

Calvin describes this as ‘an age of pride and rebelliousness fired by the awakening sex drive’.[17] Note Calvin on Genesis 34:4:

young men [ought] to take heed to themselves, lest in the slippery period of their age, the lusts of the flesh should impel them to many crimes. For, at this day, greater license everywhere prevails, so that no moderation restrains youths from shameful conduct.[18]

Like Augustine, Calvin assumes a graduated guilt as one moves with age to greater accountability for acts of wrongdoing. However, he does not dwell on evidences of corruption in small children, as Augustine does … Although young children are corrupted by original sin, when compares to older children and adults, they demonstrate a lack of malice that their elders ought to emulate. The biblical basis for this view ins 1 Corinthians 14:20, where Paul urges believers to be children not in understanding but in malice … Adult believers ought to imitate children’s natural simplicity but not their lack of understanding … Calvin, the theologian of “total depravity,” is more appreciative of the positive character of children, dwelling less on their sinfulness that some of his forebears (such as Augustine) or successors (such as Jonathan Edwards).[19]

[1] Barbara Pitkin, ‘”The Heritage of the Lord”: Children in the Theology of John Calvin’ in The Child in Christian Thought (ed. Marcia JoAnn Bunge; Grand Rapids/Cambridge: Wm. B. Eerdmans, 2001), 161.