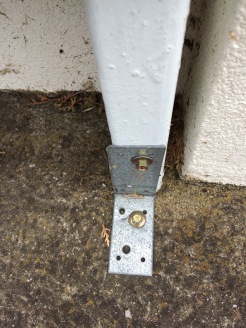 Call me ‘old school’, but I’m really not very tolerant when it comes to damaging public property. Places such as parks, public libraries, schools, rivers, parliaments, etc. are, in my view, sacrosanct, and when such places undergo vandalism the damage is done to us all. More specifically, when such damage is undertaken for the economic gain of a few, there really can be no acceptable defence at all.

The assumption here, of course, is that there really is such a reality called ‘public’, and that such a reality requires such things as ‘public spaces’, and that there is an obligation upon the public to honour such spaces. (For the purposes of this post I will not explore this matter further here.)

It is entirely unacceptable, therefore, for commercial enterprises to destroy public property. One way that this is happening is by such enterprises securing their signage to our footpaths. In the area near my home, which is in Melbourne’s Hobson’s Bay region, real estate businesses such as Williams Real Estate, Gunn & Co. and others, repeatedly screw their signage into the footpath, indifferent to the destruction done.

Rather than remove the screws – which would, in my view, be a publicly-responsible action to undertake – I have thus far taken the less aggressive route of writing, on a number of occasions now, to the Hobsons Bay City Council about this matter, and included documentary evidence to support my complaint. Thus far, they have been polite and responsive, and I have been assured that a ‘relevant officer’ has been assigned to investigate the complaints. I don’t know what the outcome has been, but I do notice that the vandalism is still happening, that the boards continue to be erected upon and secured to the footpath. (That the footpaths in my area in already in poor form is hardly the point.)

The Council’s ‘Community Signboards Policy’ stipulates that not-for-profit community groups who wish to erect temporary signs to promote community events must ensure that ‘the physical and visual amenity on the natural and built environment’ is maintained, and that such signs are not allowed to ‘damage Council infrastructure’. And yet when it comes to commercial ventures, it appears that no such rule exists. Why?

A Council that judges graffiti to be ‘vandalism, “wilful damage” and a criminal offence’ ought, in my view, to not only be fining such real estate agents in order to repair the damage done, but also pursuing legal action against them for vandalism and wilful damage. (For the record, I do not share Council’s judgement about graffiti, for I believe that graffiti can be a way of honouring public space. But that discussion too is for another post. Neither am I suggesting that this matter ought to be a priority for Council. In the scheme of things, it’s a relatively small matter indeed.)

And here endeth my wee rant.