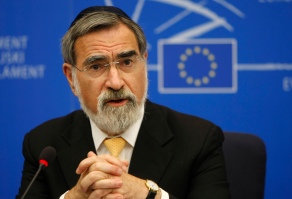 Readers of this blog will know of my deep admiration, gratitude, and respect for the work of Jonathan Sacks. He is among those few contemporary religious leaders who, in my judgement, diagnoses and communicates back to a wide public desperate for wisdom the maladies of our time, and does so with piercing soberness and profound hopefulness.

A week or so ago he was in Brussels speaking at a conference at the European Parliament on ‘The Future of the Jewish Communities in Europe’. His address was titled ‘The Mutating Virus: Understanding Antisemitism’. While I think that Rabbi Sacks has partially misjudged (for reasons I need not articulate here) the source of much of the antipathy towards the State of Israel, particularly from those in the West, I do think he’s right about antisemitism, racism, and prejudice, and possibly about Europe too. Here’s a snippet from that address, and below is the video:

The hate that begins with Jews never ends with Jews … Antisemitism is not about Jews. It is about anti-Semites. It is about people who cannot accept responsibility for their own failures and have instead to blame someone else … The appearance of antisemitism in a culture is the first symptom of a disease, the early warning sign of collective breakdown. If Europe allows antisemitism to flourish, that will be the beginning of the end of Europe …

If there is one thing I and my contemporaries did not expect, it was that antisemitism would reappear in Europe within living memory of the Holocaust. The reason we did not expect it was that Europe had undertaken the greatest collective effort in all of history to ensure that the virus of antisemitism would never again infect the body politic. It was a magnificent effort of antiracist legislation, Holocaust education and interfaith dialogue. Yet antisemitism has returned despite everything … If this continues, Jews will continue to leave Europe, until, barring the frail and the elderly, Europe will finally have become Judenrein.

How did this happen? It happened the way viruses always defeat the human immune system, namely, by mutating …

Anti-Semitism is a form of cognitive failure, and it happens when groups feel that their world is spinning out of control. It began in the Middle Ages, when Christians saw that Islam had defeated them in places they regarded as their own, especially Jerusalem. That was when, in 1096, on their way to the Holy Land, the Crusaders stopped first to massacre Jewish communities in Northern Europe. It was born in the Middle East in the 1920s with the collapse of the Ottoman Empire. Antisemitism re-emerged in Europe in the 1870s during a period of economic recession and resurgent nationalism. And it is re-appearing in Europe now for the same reasons: recession, nationalism, and a backlash against immigrants and other minorities. Antisemitism happens when the politics of hope gives way to the politics of fear, which quickly becomes the politics of hate.

You can read the whole address here.