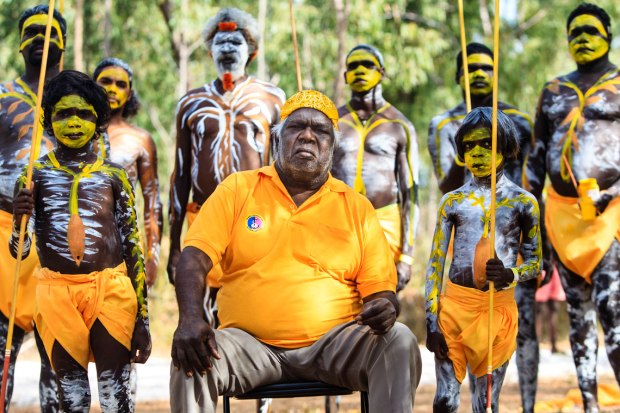 Every now and then an essay is written that will probably be read for decades, an essay that risks the invitation to change the way whitefellas view the world and their place in it. This piece by Galarrwuy Yunupingu may be one of those.

One of the recurring themes that emerges throughout the essay is that of leadership. At one point, Dr Yunupingu describes an action of a great ancestor Ganbulapula:

This action was both stunning and brilliant, and it lifted people’s eyes from the mire of disorder, disagreement and bitter division. In that unprecedented throwing of the decorated log coffin, that unexpected shift into a new context, a new network of cultural meaning was created – a new future was believed in. The action generated the possibility of a future different from the past. Bitter division was healed by way of bold, confident leadership.

What a extraordinary description of what good leadership can be about! (Most of us, I suspect, are more familiar with management than we are real leadership.)

On the subject of political leadership, the author offers these timely words:

I live in the total knowledge that politics is a business that runs hot and cold every time a new office holder comes to Canberra (and Darwin), and they have to find some answers to what they can do in their time. Three years is such a short time, and politicians are under pressure to do something instead of biting their fingernails and having no solutions.

Aboriginal people need to understand that the government of the day will always seek to justify itself, protect itself and get its reputation straight. Its members will worry about their jobs and about saying things that will keep them in the good books with their electors, who are mainly white people. And those people will often have little good to say about Aboriginal people; when the voters do talk to their politicians they may want something from us or have some problem with us, because we are not like them. And this adds to the worry of politicians who are most of all concerned about whether they will be re-elected. That’s their first commitment. That’s the real situation. So the only way through it is for a politician to risk prestige with the voters to make the achievement, and to believe that an outcome can be good for all concerned.

This type of sacrifice from strength is the key to leadership. My father had to sacrifice much, too much, to reconcile his life with the ways of the modern world. But he did so. What Aboriginal people ask is that the modern world now makes the sacrifices necessary to give us a real future. To relax its grip on us. To let us breathe, to let us be free of the determined control exerted on us to make us like you. And you should take that a step further and recognise us for who we are, and not who you want us to be. Let us be who we are – Aboriginal people in a modern world – and be proud of us. Acknowledge that we have survived the worst that the past had thrown at us, and we are here with our songs, our ceremonies, our land, our language and our people – our full identity. What a gift this is that we can give you, if you choose to accept us in a meaningful way …

Kevin Rudd, like prime ministers before and after him, acknowledged my leadership and made promises to my people. Tony Abbott made the same promises and came and lived on my land at Gulkula, and from there he ran the government for five or six days. Both were decent and respectful men. All the prime ministers I have known have been friendly to me, but I mark them all hard. None of them has done what I asked, or delivered what they promised. I asked each one to be truthful and to honestly recognise the truth of history, and to reconcile that truth in a way that finds unity in the future. But they are who they are and they were not able or not permitted to complete their task. For a prime minister is beholden to his party and to the parliament, which in turn is held by the Australian people. And the Australian people seem to disapprove of my simple truths, or the idea of proper reconciliation. The Australian people do not wish to recognise me for who I am – with all that this brings – and it is the Australian people whom the politicians fear. The Australian people know that their success is built on the taking of the land, in making the country their own, which they did at the expense of so many languages and ceremonies and songlines – and people – now destroyed. They worry about what has been done for them and on their behalf, and they know that reconciliation requires much more than just words.

So the task remains: to reconcile with the truth, to find the unity and achieve the settlement. A prime minister must lead it and complete it. The leader of the nation should accept his or her commission and simply say what he or she thinks is right, and put that forward for the nation to correct, or to accept, or to reject. Let us have an honest answer from the Australian people to an honest question.

This vision, this challenge, this way of reading the world, does not emerge out of a vacuum. It is in every way non-novel, the fruit of millennia of song cycles which, as Yunupingu describes it, both tell of a person’s life and serve as ‘the universities of our people, where we hone and perfect our knowledge’. This seems to me to speak of not only the ways that our identities are grounded in story – that we are, in fact, storied peoples – but also of the fact that such stories are characterised by both the burdens and liberties of receiving, carrying, and then passing on traditions that are always dynamic and marked with the hope that makes life bearable. Whether or not our futures lay in the direction of our past, it seems that our futures can never be about an escape from the past. The best of our leaders, such as Yunupingu himself, get this. As he writes earlier on in the piece:

As a man reaches the final points in his journey it is then for others to do the singing. Others must take the lead, acknowledge him and guide him. If there is unfinished business it is no longer for that man to carry that business; others who have taken responsibility and who have taken leadership must then bear the burden of creation. The future is theirs, to be taken by them, crafted along the terms set by law as given to us by those that have come before. And failure will be theirs also, to own and bear witness to if they fail.

I have lived my song cycle and I have done what I can to translate the concepts of the Yolngu world into the reality of my life. I have endured much change and seen many different faces – I have watched both Aboriginal and non-Aboriginal leaders move in and out. And of course I have mixed feelings when I reflect on my life’s work. I feel a deep sadness at times, yet I know that I have done much that is useful. I know that I have secured my family’s birthright – we will not drift off with the tide; we will stand and endure, and our names will pass down through the decades and the centuries. Yunupingu means “the rock that stands against time”, and so be it. But I think always of what has been lost around me against what endures. It is a form of torture for a Yolngu person to see the loss of our life: every word, every note, every slip in the song is pain; every patch of land taken; every time an outsider takes control from Yolngu; every time we compromise; and every time we lose something or someone. I tell my family to stand strong and endure, stay within the guidelines of our law, stay with the song cycles and be armed with this knowledge so as to secure for our people our lands, our way of life and our place in the world.

These are just some snippets of what really is a remarkable essay, the entirety of which you can read here.