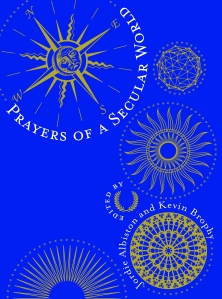 Inkerman and Blunt recently published a new anthology of work, a relatively little book by an impressive range of some 80 mostly Antipodean poets, some very well known, others hardly at all. The collection, Prayers for a Secular World, was edited by Melbourne poets Jordie Albiston and Kevin Brophy, and is introduced, fittingly so, with a brief essay by David Tacey on the religious nature of secularism. The latter helps to orient the reader to some of the terrain they are about to enter.

In their call for submissions, the editors said that they were ‘looking for poems of wonder and celebration, poems that mark the cycle of the day – dawn, midday, evening, night – the seasons, the progression of planets, the evolution of weather; poems of becoming – first steps, first words, transitions, epiphanies and inspirations; poems of belief and of doubt, pleas for protection, poems of remembrance and blessing, of forgiveness and redemption, poems of gratitude’. Short of the sternest editorial policing, such an invitation almost guarantees, more than most edited collections I think, the kind of hotchpotch smorgasbord of aptitude evident in the volume’s final form. Still.

The book’s title – which echoes Donna Ward’s claim, in Australian Love Poems, that ‘poems are prayers of the secular world’ – appears, at first glance, to promote the somewhat late-Victorian idea that poets are the new priests. But the pages therein are marked by a welcome avoidance of such presumption, their words occupied with patterns of time and of place, of dying and of encountering the world anew, and with the sounds of landscapes mostly suburban, where the majority of its readers, no doubt, dwell and pass through. In a review published in The Australian, Geoff Page noted of the title: ‘They are certainly not be [sic] “prayers” in the intercessory sense but they are contemplative and very likely to widen and diversify the metaphysical sensibilities of all but the most hardened of fundamentalists ­– who, no doubt, already have their own (more limited) rewards in view’. This is a point worth repeating, especially perhaps for those uncomfortable, in Tacey’s words, with the notion that ‘the transcendent doesn’t happen elsewhere, apart from the world, but is a dimension of the world’. Still, the publisher’s description of the book as ‘a meditation on living in a post-religious world’ strikes me as very odd – odd not only as a sketch of the book’s content, but also odd in terms of its assessment of things. Observers of the cultural landscape of our day might well enquire what world exactly is being spoken of here.

There is, for many, the perennial temptation to will oneself into a kind of authenticity. Such efforts are an expression of a romanticism that either refuses or forgets to weave into the solidest realities a knowledge of its loss. The result is, as the poet Christian Wiman has observed, a ‘soft nostalgia’. There are here, happily, a good number of notable exceptions to what might otherwise be merely another unwelcome example of such, of groping disorientated by a handful of tamed Emersonian ghosts trying to iron out the highs and lows of life apparently naïve to the view that our being of dust does not equate to an uncritical defence of some pathetic form of natural theology. In this volume, poems by Chris Wallace-Crabbe, Andrew Lansdown, Fiona Wright, Robyn Rowland, Debi Hamilton, Ron Pretty, Anne Elvey, Michelle Cahill, and David Brooks, for example, serve this end particularly well. So do, I think, these two contributions:

that was some fiery trajectory you took, moving to Kinglake
to be among giants and clouds
I recall you dying once before
…….. .. run down at the crossing, going home for lunch

but you’re on Yea oval, among the nightied and discalceate
and you’re okay
road posts gone
all delineators and signs, the way forward and way back
…….. ..only black stags, ash deafening

one charred fence post
and your old weatherboard like a kind of gloating, it falls to you
…….. ..to be the lucky one
better to believe in regnans than luck, they have what it takes
martyrdom, lofty sentiments
…….. ..all crown and nimbus and resurrection

up on the mountain, no one knows if lyrebirds
are mimicking silence
…….. ..volunteers go into the wasteland, leave songs out
musk and fern and siltstone tunes

it rains and then some
…….. ..and the green is giddying
stags wash white, their millioned saplings serry
…….. ..knit roots, squeeze out the other then each other
ashes move up the escarpment and up
to the yellow-raddled cockatoo, yellow-eyed currawong, to the sun
and you are in the very dawn of things