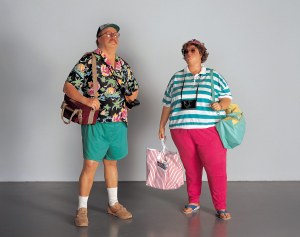 While in the mad throes of writing lectures for an upcoming course that I’ll be teaching on the church, I am grateful to be re-reading Michael Jinkins’s very fine book The Church Faces Death: Ecclesiology in a Post-Modern Context. In one little section, subtitled ‘The Hitchhiker’s Guide to the Church’, Jinkins offers a great reminder of the challenge and danger that inherently lies in teaching a course on ecclesiology. It begins:

Roland Barthes’s essay “The Blue Guide” is suggestive for those who want to learn to reflect on the speech of the church about itself. His essay considers a popular series of tourist guidebooks (called Guide Bleu in French) to various European destinations. To be precise, his essay considers the presuppositions, one might almost say the prejudices, of the guidebook, which remain unstated by the editors and reduce the particularities of a country and its inhabitants to stereotypes, cliches, and sights (or monuments) to be seen, but not observed. The complex and real “human life of a country disappears,” he writes, “to the exclusive benefit of its monuments.” And the rich diversity of human existence is boiled down to a few picture postcard images. He writes:

In Spain, for instance, the Basque is an adventurous sailor, the Levantine a lighthearted gardener, the Catalan a clever tradesman and the Cantabrian a sentimental Highlander. We find again here this disease of thinking in essences, which is at the bottom of every bourgeois mythology of man (which is why we come across it so often). The ethnic reality of Spain is thus reduced to a vast classical ballet, a nice neat commedia dell’arte, whose improbable typology serves to mask the real spectacle of conditions, classes and professions. For the Blue Guide, men exist as social entities only in trains, where they fill a “very mixed” Third Class. Apart from that, they are a mere introduction, they constitute a charming and fanciful decor, meant to surround the essential part of the country: its collection of monuments.

Is there not a corresponding danger in ecclesiology to reduce the vast diversity of church, the ambiguities of this rich human-divine reality, to a few neat (noncontradictory) patterns, types, models, paradigms, definitions, or descriptions—to notice the monumental remains and to dismiss as irrelevant (and irrelevantly messy) the actual communities of faith that shape these monuments and that move within them and make sense of them? What would it entail, what would it require of us, to notice and take seriously the particularities of church, to go beyond phenomenology to phenomengnosis, to understand the ambiguous flux of existence as itself the sign that demands to be understood in its own terms? Barthes says, later in this essay:

Generally speaking, the Blue Guide testifies to the futility of all analytical descriptions, those which reject both explanations and phenomenology: it answers in fact none of the questions which a modern traveller can ask himself while crossing a countryside which is real and which exists in time. To select only monuments suppresses at one stroke the reality of the land and that of its people, it accounts for nothing of the present, that is, nothing historical, and as a consequence, the monuments themselves become undecipherable, therefore senseless. What is seen is thus constantly in the process of vanishing, and the Guide becomes, through an operation common to all mystifications, the very opposite of what it advertises, an agent of blindness. 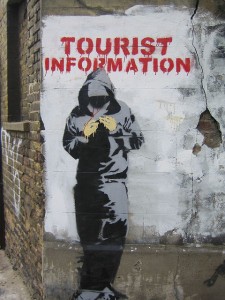 A tourist, perhaps on one of those packaged coach tours, can visit a foreign country only to tick off the sights (the monuments): the Eiffel Tower, Westminster Abbey, Edinburgh Castle. She envisions the people of these foreign countries she visits as stereotypes already firmly established in her head: Scot in kilt with bagpipes, Englishman with umbrella and bowler, Frenchman wearing beret, smoking cigarette, drinking wine. The tourist returns home having traveled but having only minimally encountered the countries toured and their inhabitants. The idiosyncratic, the eccentric reality of humanity, the exactness of place and time and circumstance, the life lived in ordinariness is easily ignored in the headlong rush to account for all stereotypes (thus never really knowing the people) and monuments (thus never understanding why the monuments are there or what they signify). One sees here the way in which the yearning for essence can alienate us from history; though this superficial tourist may be surrounded by “historical” monuments, she has little access to their meaning because they have been decontextualized; consequently, she is estranged from her own history of being present in that place. In the worst cases, the tourist takes her “home” on tour with her to the extent that she never enters into the foreign time and place at all—the ultimate jet lag.

The ecclesiastical tourist, likewise, can emerge from a “study of the doctrine of the Church” having never entered into church at all. While giving the impression of sailing to all the great ports of call, he may have only circumnavigated the stereotypes. What is clearly implied in such ecclesiological globetrotting is that the church is an idea, and that paying attention to the actuality of particular human communities of faith only distracts us from some divine ecclesiology, a neat analytical description that is (supposedly) forever and everywhere true.