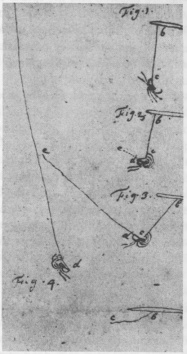 ‘They [sic] are some things that I have happily seen of the wondrous and curious works of the spider’. So wrote Jonathan Edwards in his ‘The “Spider” Letter’ (1723). In that same letter, Edwards describes the spider as both ‘most despicable’ and also as ‘wondrous’ because, he argues, it is by observing such and their ‘glistening webs’ that ‘the wisdom of the Creator shines’ forth to ‘the learned world’.

America’s greatest theologian proceeds, at considerable length and with considerable enthusiasm, to recount his observation of spiders who go ‘sailing in the air … doubtless with abundance of pleasure’, before turning, in a moment reminiscent of St Paul’s ecstatic conclusion to Romans 11, to write:

Hence the wisdom of the Creator in providing of the spider with that wonderful liquor with which their bottle tail is filled, that may so easily be drawn out so exceeding fine, and being in this way exposed to the air will so immediately convert to a dry substance that shall be so very rare as to be lighter than the air, and will so excellently serve to all their purposes.

The Creator’s wisdom and ‘exuberant goodness’ is equally manifest, Edwards believes, in the way that the Creator has not only provided every necessity for all sorts of creatures, including insects, but also in the ways that this leads unavoidably not to their ‘recreation’ but to their ‘destruction’. Edwards proceeds to describe the ways that most spiders eventually end up in the ocean – as they are ‘carried over the water their webs grow damp and moist and lose their levity and their wings fail them, and let them down into the water’. The same is true, he writes, of flies, butterflies, millers, and moths – and that there is a kind of justice in this fact. Moreover, he suggests, it too makes plain the Creator’s wisdom, for it is by such that ‘the corruption and nauseousness of the air, of which flying insects are little collections’, are carried off and buried ‘in the bottom of the ocean where it will do no harm’. And spiders are afforded a particularly special place in Edwards’s view precisely because spiders are ‘collections of these collections, their food being flying insects, flies being the poison of the air, and spiders are the poison of flies collected together’.

I’m fascinated by Edwards’s fascination with and attention to such things. (There are moments like this in Calvin’s corpus too which I find equally enchanting.) And I was reminded again of Edwards’ letter late last night while observing a little eight legger devouring a beetle in our front yard. While it may be that the spiders of New England ‘never work in the night’, the same certainly cannot be said of their hairy cousins here in Australia.

I captured that fact by way of a couple of videos which I uploaded to YouTube:

By the way, if anyone can shed some light on the name of this little arthropod (I wasn’t able to identify it here) I’d be grateful.