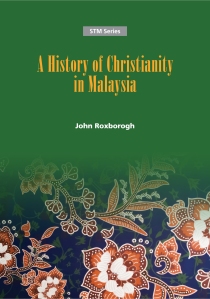 The Presbyterian minister and historian John Roxborogh has been accumulating research notes and scraps of information on Christianity in Malaysia and Southeast Asia for thirty years. Some of the fruit of that work is now available to us in his recently-published (and very-reasonably priced!) A History of Christianity in Malaysia (Armour, 2014). The volume comprises of a series of intelligent, well-researched, and accessibly-written reflections on how Christianity has been – is – part of the Malaysian story, not only from the beginning of ‘Malaysia’ in 1963, but through the centuries leading to the nation’s creation as well.

Roxborogh’s aim throughout is twofold: to offer a framework for further study, and to ‘provide an integrated narrative of how, as a universal faith, Christianity became a religion that was part of Malaysia at its formation’. Among the kaleidoscope of stories are accounts of some early generations of missionary scholars who felt pressure to recast stories in order to win support at home, while others worked to document more honestly the way of life of those they found themselves among and because of such better recognised the need to champion the cause of others rather than their own. This is, of course, a story that is not without echoes elsewhere. And part of the achievement of Roxborogh’s disciplined attention to its Malaysian contours is how it assists us to not only better understand the Malaysian parts of that story but also to interpret other contexts in more informed light.

The final chapter, ‘Praying and Belonging: 1989 to 2013’, owes some debt to Grace Davies, Kevin Ward, and others who talk about ‘believing and belonging’ as separable variables in European and Western Christianity. In Malaysia, praying and belonging is, according to Roxborogh, a fair description of the current situation. It also indicates something of the dynamic change in Christian self-identity and sense of mission that has taken place, in Malaysia and elsewhere, over the past 60 years. We need to know more about that story, about why it has happened and is still happening, and to think more deeply about what might be involved in faithfully documenting the story as it continues to unfold. Here in this book, Roxborogh shows us one way that this can be done.

I understand that some thought is already being given to a Chinese edition. Were such to eventuate, this may occasion an opportunity to consider additional themes and emphases, and to revisit too the ones that Roxborogh has already attended to but in a new light. For example, as Roxborogh is well aware, the challenges that attend being both ‘Malaysian’ and ‘Christian’ is mirrored in the dilemma of how to be both ‘Malaysian’ and ‘Chinese’, or ‘Malaysian’ and ‘Indian’ and ‘Eurasian’. Such questions remain pressing ones, and ones that are not to be discarded when the weight of being an indigenous church in Malaysia is now carried primarily by large groups of local Christians from East Malaysia.