Doll’s faces are rosier but these were children
their eyes not glass but gleaming gristle
dark lenses in whose quicksilvery glances
the sunlight quivered. These blanched lips
were warm once and bright with blood
but blood
held in a moist blob of flesh
not split and spatter’d in tousled hair.

In these shadowy tresses
red petals did not always
thus clot and blacken to a scar.

These are dead faces:
wasps’ nests are not more wanly waxen
wood embers not so greyly ashen.

They are laid out in ranks
like paper lanterns that have fallen
after a night of riot
extinct in the dry morning air. 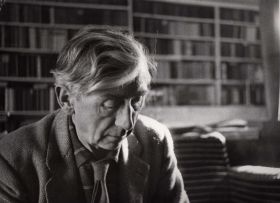 These words were written in the 1930s, in response to a photograph accompanying a newspaper article on the Spanish Civil War. Like much of Read’s writing, they could have been written this week or, indeed, in any week since the third century BCE, when the first paper lanterns were created. This is part of their enduring power. But what most strikes me about Read’s poem is the contrast between the violence and loss described in the first three stanzas and the order and reclamation – the being ‘laid out in ranks’ – spoken of in the final one: the mocking plastering-over of violence blasphemously championed under the pretext of bringing order to chaos.

Such efforts to bring about order like this are not necessarily wasted or misguided; indeed, they are a requisite part of the responsibility laid upon us as creatures made in the image of one who is himself set against those parasites in the cosmos which threaten life. However, and to state the obvious, not all that promotes itself as doing that work is, in fact, doing that work. And so the hard and patient and ceaseless work of discernment, the drawing of a line (one not necessarily straight or entirely clear) which steers us away from those Forsyth calls ‘the facile hierophant and the sweet exalté’ and towards a world made new, transformed not by the invasion of a foreign power or by the ascension of a paladin self-made but from within the very bastille of the human condition, charged with Spirit.