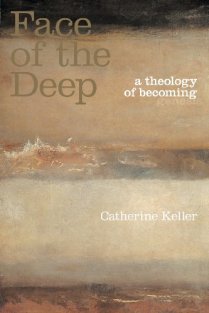 Catherine Keller’s Face of the Deep: A Theology of Becoming is a wonderfully-creative, beautifully-written, and seriously-provocative read. An entanglement of biblical studies, poetry, and feminist and process theologies, Keller offers a profound commentary on a most neglected Hebrew text, Genesis 1.2: ‘… the earth was a formless void and darkness covered the face of the deep …’.

The book represents Keller’s effort to take seriously Genesis’s claim that creation is not creatio ex nihilo (creation out of nothing) but creatio ex profundis (creation out of the deep waters, creation as the germinating abyss). She sees this in stark contrast to the tendency in western theology to emphasise the creative and omnipotent Word which is, in a sense, spoken against creation with a view to taming and ordering its chaos. She writes:

Christianity established as unquestionable the truth that everything is created not from some formless and bottomless something but from nothing: an omnipotent God could have created the world only ex nihilo. This dogma of origin has exercised immense productive force. It became common sense. Gradually it took modern and then secular form, generating every kind of western originality, every logos creating the new as if from nothing, cutting violently, ecstatically free of the abysms of the past. But Christian theology … created this ex nihilo at the cost of its own depth. It systematically and symbolically sought to erase the chaos of creation. Such a maneuver … was always doomed to a vicious circle: the nothingness invariably returns with the face of the feared chaos – to be nihilated all the more violently.

Our tradition, she says, has leaped from Genesis 1.1 to 1.3, from the beginning with God to the divine speech, ‘Let there be light’. In this view, God does not work with the ‘formless void and darkness’ but, in a sense, against it. But wedged between these two verses, she reminds us, is ‘a churning, complicating darkness’ which ‘refuses to disappear’. She writes:

It refuses to appear as nothing, as vacuum, as mere absence highlighting the Presence of the Creator, as nonentity limning all the created entities. It gapes open in the text: ‘and the earth was tohu vabohu, and darkness was upon the face of tehom and the ruach elohim was vibrating upon the face of the mayim’ …

To make her case, she engages constructively with the work of Augustine, Barth, Deleuze, Derrida, Whitehead, and others. My favourite chapter was on Melville’s Moby-Dick, ‘“Leviathanic revelations”: Melville’s hermenautical journey’, wherein she suggests that ‘the infinity of a chaosmic hermeneutic signals … not a dearth but an excess of meaning, a meaning-fullness or meaning-flux released by the refusal of hard lines and clear boundaries’. Religion which tries to protect us from the risk of ‘being eternally stove and sunk by [the great Leviathan]’ (Melville) has, Keller avers, ‘offered us cartoons instead: a God-thing, an evil thing, and a creation full of things, surrounded by nothing’. ‘When religion pretends to “systematized exhibition,” it removes us both from the streets and from the deep’.

One real achievement of Keller’s book is how effectively it reminds us that creation is not a beast to be tamed, but a deep mystery – a mystery that we experience the echo of in our own times of chaos and deepest prayer, and over which the ‘wind from God’, the ruach elohim, ‘vibrates’. We are, in our most primordial reality, vulnerable creatures of this earth in which the ‘formless void and darkness’ from time to time reasserts itself. Where Keller’s work is less satisfactory, however, and that characteristically so for a process theologian, is in the absence of any serious christology – the journey which the kenotic God undertakes into and with creation’s dark and formless depths. Put otherwise, while Keller certainly plumbs the subterranean depths of creation, and that with some existential bite, she stops short of going where God in Christ goes, and so where a fully Christian account of creation bids theologians go.

O God, who created the heavens and the earth, for whom nothing that is is apart from you, and who mends all the tears in the canvas of creation, we bless you.

We thank you for the promise that nothing in all creation can keep us from your love, even while we confess that that love is so often a stranger to us and that our lives are more often characterised by anxiety than by the courage to enter the deep caverns of creation and of your love’s mysterious shadows.

We mostly live in the shallows, and for that we are relieved the burden of constant darkness – our greatest fear that the sense that our very being is under threat. And sometimes we find ourselves in water too deep, where your presence is marked by an absence, and our presence is marked by our own nightmares, the storehouses of forgotten memories and open wounds that recoil at your gracious promise of healing and redemption. Thank you that even the darkness is not dark to you.

Give us a candle of your Spirit, O God of the depths, as we encounter and are encountered by the deeps of creation’s being, that these might be for us the spring of new life, and that our service in your name might bear witness to the profound depths that you have traversed and continue to transverse in Jesus Christ. Amen.