So why should Christians be championing the cause of asylum seekers today? In short, this issue goes to the heart of our identity and calling as the people of God.

The Gospel of Matthew tells us that Jesus started life as a refugee child, fleeing with his family to Egypt.  Even his father’s name, Joseph, reminds us that Jesus was not the first Jew to be a refugee in Egypt. All the tribal ancestors of Israel took refuge there. We read that scripture was fulfilled when Jesus went there as a child, because “Out of Egypt I called my son” (Matthew 2.15). The quote is from Hosea 11.1:  “When Israel was a child I loved him, and out of Egypt I called my son”. That is, Matthew sees a spiritual analogy between the life of Jesus and the life of Israel: both are marked by the refugee experience.

And this experience is also embodied in the laws of Israel. So, for example, Leviticus 19.34 says:

The immigrant who resides with you shall be to you as the citizen among you; you shall love the immigrant as yourself, for you were immigrants in the land of Egypt: I am the LORD your God.  (cf. Exodus 22.21)

Similarly, the later prophets came to recognize the treatment of asylum seekers as a litmus test of faith (e.g., Jeremiah 7.5-7).

In the Old Testament, the ‘immigrant’, ‘alien’, ‘refugee’ or ‘sojourner’ (all possible translations of ger) is a foreigner who has left his or her country to settle elsewhere. Perhaps the most common reasons for movement are famine and war.

Some things never change: the United Nations Convention Relating to the Status of Refugees (1951), for example, arose as a response to international displacements following World War II, and since Australia is a signatory to this Convention, we recognize the legal right to seek asylum.

When people arrive in a host country, there are always complex questions about the extent of their assimilation. Not surprisingly, then, Old Testament laws sometimes set assimilating strangers apart from ‘the foreigner’ (thenokri or ben nekar) who is not given full rights of participation (e.g., Exodus 12.43 excludes such people from the Passover). This distinction is surprisingly overturned, however, in Isaiah 56.3,6 where the ‘foreigner’ (ben nekar) can offer acceptable sacrifices to God and is welcomed into the covenant community.

References to strangers in the New Testament are few but significant. Being ‘strangers’ (paroikoi) becomes a central metaphor for Christian identity in some books, building on the theological idea in Leviticus that all Israelites were in some sense ‘sojourners’ (Leviticus 25.23, cf. 1 Peter 1.1 and Ephesians 2.19).

Perhaps against our expectations, we may even find Christ present in the stranger. This is precisely the point that is made in the parable of the sheep and the goats in Matthew 25: the hungry and thirsty stranger (xenos in vs. 38 and 44) may actually be the Lord, and not even the people in the parable called ‘the righteous’ have been able to discern this. In other words, no-one has the power to tell whether the needy stranger may in fact be Christ.

Ezekiel 47 is also a challenge to our political imagination: it takes us beyond random acts of kindness and demands that refugees be given a ‘fair go’ in the provision of land, that is, basic resources that provide the foundation of economic security:

In international comparisons (taking account of national wealth and population sizes), the welcome that Australia offers to asylum seekers is not very impressive.

Ed. This piece, written in 2011, and which cites sources which are almost prehistoric, is, of course, completely irrelevant and dated now and I only draw attention to it for the benefit of those historians who may one day be interested in researching such obscure things. It’s almost impossible today to believe that once upon a time some Christians who happen to be living in Australia thought it an act of compassion and of mature political judgement to demonise some of the most vulnerable and yet extraordinarily courageous people on the planet, and an act of freedom to disregard not only the rule of law but, more importantly, the command of God. 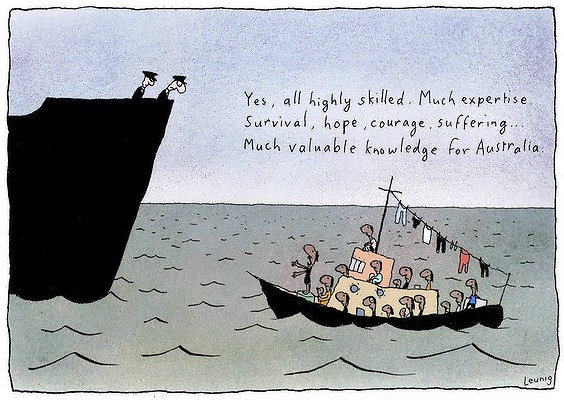