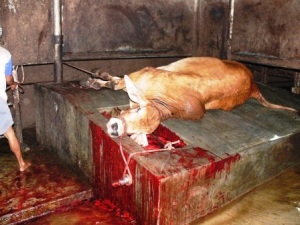 Recently, I posted a video of David Clough’s lecture ‘Rethinking Animality: Towards a New Animal Ethics’. One of the reasons that I drew attention to that lecture was because I consider the work that David (and others too) is engaged in around this issue to be incontrovertibly ‘vital’ [from the late fourteenth century Latin vitalis, meaning ‘of or belonging to life’]. Any society that takes lightly the killing of animals (those creatures whom Dietrich Bonhoeffer refers to as the brothers whom Adam loves), as do those societies with which I am most familiar, has grossly misjudged the sheer giftedness of life itself and is, it seems to me, already well on the way to responding lightly to and of justifying various forms of homicide and deathliness in its midst, blinded by the lie that the life of any creature belongs to something or someone other than God. This is why Karl Barth, for example, argued with due passion that ‘the slaying of animals is really possible only as an appeal to God’s reconciling grace’, and that we ought to have very good reasons for why we might claim the life of another creature for ours. Human beings can only kill an animal, Barth avers, knowing that it does not belong to us but to God alone, and that in killing it – an act which itself is incredibly traumatic, as I can testify – one surrenders it to God in order to receive it back from God as something one needs and desires. ‘The killing of animals in obedience is possible’, Barth contends, ‘only as a deeply reverential act of repentance, gratitude and praise on the part of the forgiven sinner in face of the One who is the Creator and Lord of humanity and beast’. Here Barth’s words compliment the Jewish tradition which champions the need to avoid tzar baalei chayim – causing pain to any living creature – and insists that where animals are killed that they are done so ‘with respect and compassion’, most properly by way of shechita.

With that, I come to the subject of this post; namely, live animal exports. Animals Australia reports that

every year millions of Australian animals are exported live for slaughter. Those who survive the journey often endure brutal treatment and conscious slaughter. Cattle, sheep and goats are sent throughout the Middle East and South East Asia — to countries with no laws to protect them from cruelty. Tens of thousands of animals don’t survive the sea journey and those that do disembark into countries where they are transported, handled and then slaughtered in appalling ways. Most animals slaughtered overseas have their throats cut while they are fully conscious, leading to an incredibly painful and prolonged death. Since 2003, Animals Australia has conducted numerous investigations into the treatment of animals exported from Australia. The evidence from investigations in the Middle East and South East Asia has consistently revealed the willingness of Australia’s live export industry, and consecutive Federal Governments, to export live animals despite appalling cruelty in importing markets.

While Australia remains by far the world’s largest exporter of sheep and cattle, this is not, of course, only an Australian issue. Earlier this year, the New Zealand Herald, for example, reported a ‘Boom in live cattle exports to China’, although thanks to the Customs Exports Prohibition (Livestock for Slaughter) Order these are mostly for breeding purposes, and recent protests at the Port of Dover in the UK are evidence that exporting of live cattle remains a practice in the UK and the EU, with exports going mainly to Italy and France.

This video, produced by Animals Australia, testifies to the cruel and godless practices that attend the live export of animals:

Clearly, this is a political as well as a moral issue (not that the two can ever be separated); and as the Australian Federal election draws near, I wish to publicise my support for the campaign by Animals Australia and Ban Live Export against the sickening and anti-vital practice of live animal exports. I learned recently that one of the Coalition’s priorities, should it win the election, is to ‘apologise’ to Indonesia (a country that receives some 45% of Australia’s live animals) for the Labour Government’s five week trade suspension in 2011, a suspension put in place in direct response to an ABC Four Corner’s program, ‘A Bloody Business’, which exposed the practices that attend live animal exports. In Australia, with the exception of Independent Senator Nick Xenophon, it has been The Greens who have consistently spoken out against this practice and who have sort to (re)introduce the Live Animal Export (Slaughter) Prohibition Bill (2012) into the Senate. And in New Zealand, from which there has been no live animal exports for slaughter since 2003, it is again The Green Party who have tried to maintain pressure to restrict the export of live animals. (I don’t mention this in order to propagandise for The Greens, but simply to report a fact.)

Here is the campaign video produced by Animals Australia:

Opposition Leader Tony Abbott, and the other Coalition party leaders, seem to have forgotten – or, just couldn’t give a rats about – the outrage that Australians felt after that program aired, the facts therein being also corroborated by the live export industry’s own reports. Certainly, it is difficult to see how any formal apology to the Indonesian government or business groups could do anything other than serve to send a message that animal abuse is condoned. To my mind, this ought to be an important election issue. It is certainly an important theological issue. So if you are a fellow Australian citizen, or have your name on the electoral role, then please consider joining me in supporting this campaign.