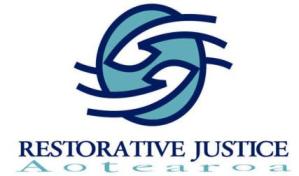 The recent announcement that government tendering of Restorative Justice (RJ) services throughout Aotearoa New Zealand to a smaller number of providers based here in NZ or from offshore is imminent. Judith Collins, Minister of Justice, has also announced there an increase of funding of $4.42 million in the May budget. Clearly this National Government wants to expand services.

A good thing you might say. Yes it is, but … and there is a large ‘but’. Ministry staff numbers entrusted with servicing the Restorative Justice groups around the country have gradually diminished over the last thirteen years since we in Dunedin and three other jurisdictions trained and were part of the world-first pilot of RJ as an alternative way of doing justice within the Justice system.

From a vibrant, forward-thinking, large group of public servants, the staff in this unit now number about five. The logic is, I suspect, that it is much easier and more cost efficient for a small group of Ministry staff to work with a handful of providers; the fewer the better.

Restorative Justice Aotearoa, the national grouping of all RJ services in NZ, is not in a position to put in a tender for all those services and is clearly not interested in doing so.

Nicola Taylor, the feisty Director of Anglican Family Care in Dunedin under whose umbrella we work as Restorative Justice Otago, providing long-term, highly professional and skilled work in bringing victims and offenders together to hear each other’s stories and to begin repair of the harms caused by offending, has decided we have no other option than to submit a tender ourselves. It’s risky because we have no certainty we will be successful, and because there is no contingency plan if we fail. Our story will be replicated throughout the country for the other RJ providers.

So we are committed to going all out for a strong bid to provide services in our Otago region. We have a depth and breadth of experience and are known and trusted by victims and offenders alike, as well as by local professionals working within and around the court system. This all has to be done in a few short weeks rather than months. Anglican Family Care is committing resources including in governance and making tenders to ensure we put in the best tender we can.

If you can help with brief letters of support for our bid, or for the RJ group near you elsewhere in the country in the same boat as we are, then, who knows, Peter does not have to be robbed in order to pay Paul and both might have a chance to live life in all its fullness!