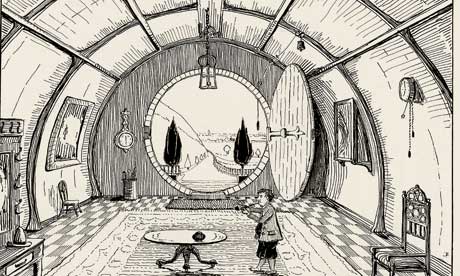 On Mondays, Wednesdays and the occasional Saturday evening, ministers are a little bit like hobbits. As a result of his encounter with the ‘fierce and jealous love’ of the dwarves, Bilbo Baggins, we are told, ‘got up trembling’:

He had less than half a mind to fetch the lamp, and more than half a mind to pretend to, and go and hide behind the beer barrels in the cellar, and not come out again until all the dwarves had gone away. Suddenly he found that the music and the singing had stopped, and they were all looking at him with eyes shining in the dark.

For some of us, that’s how the call to train for pastoral ministry happens – where love and joy lead to confusion and timidity which in turn lead to the cessation of music and to finding oneself in the spotlight examined carefully by probing ‘eyes shining in the dark’.

When our assumptions are challenged, when our faith is stirred, when things once familiar become the new unknown, when we find ourselves travelling ‘too near the mountains’ in unguarded territory seldom traversed by ecclesial wayfarers, and when all we have in our kit are ‘old maps’ which are of ‘no use’ in this new terrain, it may be that at that point we have begun, like Abraham and Sarah and Mr Baggins, on a quest that will leave us and the future different.

Colourful and noisy and undersized hobbits enter the quest, as Tolkien reminds us in his ‘Notes on W. H. Auden’s review of The Return of the King’, not to preserve ‘this or that polity, such as the half republic half aristocracy of the Shire’, but rather to engage in ‘liberation from … evil tyranny’. Such words serve as a reminder of our calling too, that the people of God are not called to preserve that familiar life that they had known in the Shire but rather to imagine a future in which all of life’s enemies have been overcome, and to direct all their efforts towards that end. Along the way, they not only lose their reputation, but they also carry unanswered questions, all the while knowing that there can be no going back. Nor, as Bilbo was to discover, can there be anything to be gained by going sideways. And it is precisely in both the refusal to abandon questions and the determination to move forward nonetheless that Bilbo and his company of friends discover that prudence is not about worldly cleverness but is rather about uncomplicated minds and wills conformed to a life of virtue, of boundless mercy, and of unbending devotion to the destruction of that which would undo their very being. It is to this end, we hope, that the church’s hobbits will direct their efforts.

And along the way, may they learn from Galdalf and Aragorn and their other companions that

All that is gold does not glitter,
Not all those who wander are lost;
The old that is strong does not wither,
Deep roots are not reached by the frost,
From the ashes afire shall be woken,
A light from the shadows shall spring;
Renewed shall be blade that was broken:
The crownless again shall be king.