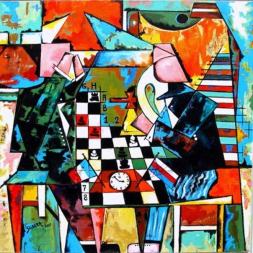 Some years ago now, my dear friend Rick Floyd shared a wonderful wee parable about pastoral ministry. It was called ‘Prepare Three Envelopes’. He then followed it up with an insightful midrash which bears repeating:

One of the rules I live by is to never explain a joke, but I’m going to break that rule to talk about my recent post: Prepare Three Envelopes: A Parable about Pastoral Ministry.

As several of you have pointed out it is an old joke. John McFadden said he “kicked the slats out of his crib laughing” the first time he heard it. Several of you told me different variations on the one I told, which I think I first heard from Peter Wells, my canny former area minister.

Many of you said it was both funny and painful. Bob Grove-Markwood said, “I laughed, I cried.” Verlee Copeland said she wished “it were funnier for that bell tolls for us all.” It surely resonated with many clergy, which is no accident.

The joke itself was just the frame I used for the picture I wanted to draw. I put the joke in an extended shaggy dog style to accomplish several things. First, I wanted the heroine to be a bit of a cipher and not a fleshed-out character, so that clergy could fill in their own particulars and relate to her situation. I made her a woman pastor so that the parable wouldn’t be seen as strictly autobiographical, although there is more of my own story in it than is entirely comfortable.

I wanted to evoke a certain kind of congregation, what I will call here the procedural church. Now such a congregation doesn’t exist as an ideal type, but I believe most mainline congregations have features of what I will describe.

As I have written elsewhere (“Introduction” to When I Survey the Wondrous Cross) I believe the dominant mode of reflecting on congregational life in our time is not theological (as I believe it should be), but managerial, psychological, and political.

So a managerial congregation will borrow outlooks and methods from the corporate world, and be preoccupied with metrics, goals, objectives, and outcomes largely cast without use of the church’s historic grammar. My reference to the second envelope was a small swat at this approach.

The psychological congregation sees its life in therapeutic terms, and employs the language of health and pathology, of addiction and recovery, and co-dependence. This model loves to talk about boundaries. My little dig at interim ministry comes from my conviction that the family systems model employed by many interim ministers is a blunt tool to deal with complex congregational life, and often scapegoats former pastors, which the Intentional Interim Network dismissingly refers to in their training as BFP’s, Beloved Former Pastors. As a beloved former pastor myself I feel this outlook is disrespectful to dedicated leaders who have given their lives for the church.

The political church sees itself as a change-agent in an unjust and oppressive society, and understands its mission to advance a series of predetermined causes. The bond between congregants is political like-mindedness, and those who don’t “get it” are likely to be driven away without regret. This kind of church, usually liberal in the mainline, fosters a paranoid style, which demonize those who disagree with it. They are always railing against the Religious Right, but actually provide a mirror image of those they fear and distrust, a shadow side Religious Left.

Now I must insert the mandatory self-evident truth that there are genuine insights in all these approaches, and wise leaders should avail themselves of whatever is useful in the culture. Having said that, what is striking to me about the procedural church is the dominance of its perspective over the church’s own grammar.

Congregations can partake of all three of these procedural approaches in various combinations, but what they all share is a procedurally driven church whose agenda takes little account of the church’s own rich heritage of congregational self-understanding derived from scripture and tradition. Ecclesiology, the sub-category of theology that thinks deeply about the church, has a long and deep ecumenical storehouse of insights on how to be the church that are largely ignored or forgotten. Leander Keck, in his fine book, The Church Confident, once compared the contemporary church with folks who inherit a fine old mansion, but choose rather to live in a pup tent in the back yard.

So notice that in Prepare Three Envelopes I never mention God, Jesus Christ, the Holy Spirit, the Trinity, the Scriptures, the sacraments, the creeds, or Christian doctrine. Our heroine does pray, but whether it is Christian prayer is left an open question.

I tried to evoke a kind of flatness in this imaginary congregation. We don’t see our pastor preparing or delivering a sermon, baptizing a baby, presiding at the eucharist, praying by a sickbed, or standing by a grave, even though these activities take up a good deal of any pastor’s time in real life. What we do see her doing is strategizing and attending meetings, the hallmarks of the procedural church.

Now at the end of the parable our heroine is burned-out because she has been driving this frenetic congregational juggernaut out of her own soul, which is now seriously depleted. And if there is one feature common to all three kinds of procedural congregations it is this endless frenetic activity, what P.T. Forsyth once called “The Sin of Bustle.”

Morale is bad in the procedural church. Brad Braxton’s sudden and sad departure from Riverside Church has lit up the blogosphere with comments from clergy who feel ill-used by their congregations. There is always plenty of blame to go around in any church kerfuffle, but my perception of many congregations is that their fights and preoccupations about procedure, in Braxton’s case over his salary package, arise because they do not know how to be church.

They know how to manage organizations, they know how to analyze family systems, and they know how to drive a political agenda. But when it comes down to being the church of Christ, to hear his living voice in sermon and text, to eat his sustaining bread, to share his cruciform life, to know that it is his ministry we are called to share and not just be our own voluntary association, not so much! And clergy can blame toxic congregations all they want, but isn’t it the work of the ordained ministry to keep these things before them?

Without sound teaching, faithful preaching, lively and sacramental worship, and enriching group life, the congregation can have all the procedures down and still have lost its soul.