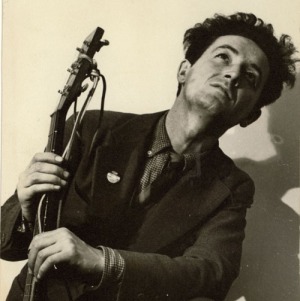 Today marks the hundredth birthday of one of America’s great human beings – Woody Guthrie (July 14, 1912 – October 3, 1967) – who, in the spirit of the Hebrew prophets and other great secular saints, understood well that it’s damn impossible to tell the truth apart from some form of protest; i.e., apart from being a stone in the shoe every now and then, or what is referred to in French as ‘pissing others off’. I was reminded of this fact recently while reading Poems of Protest: Old & New, a volume edited by Arnold Kenseth, and musician John Mellencamp put it well this week in his own poetic tribute to Guthrie.

Of course, there’s much to admire about Guthrie. Not only was he a poet-musician who inspired (both directly and indirectly) a generation – and subsequent ones too; Guthrie’s famous ‘ripples’ come readily to mind – but he did so precisely by championing (not unlike William Stringfellow) that the integrity that attends truth-telling is to be prized above all those powers that would clamour for a culture’s attention and value bank. So, for example and most famously, denying the copyright nazis and their lawyers who would, albeit mostly in ignorance (I, on better days, like to think), seek to put a culture’s creative processes in chains to be prostituted off to the highest bidder, Guthrie, with the boldness and humour that telling and loving the truth demands, wrote (in the late 1930s) of one of his songs:

This song is Copyrighted in U.S., under Seal of Copyright # 154085, for a period of 28 years, and anybody caught singin’ it without our permission, will be mighty good friends of ours, cause we don’t give a darn. Publish it. Write it. Sing it. Swing to it. Yodel it. We wrote it, that’s all we wanted to do.

The BBC aired a worthwhile documentary on Guthrie in 1988 which is well worth watching; you can do so here. And here’s a clip of Woody singing ‘John Henry’ (with Sonny Terry and Brownie McGhee) from 1946 where he’s doing his darndest to prove that ‘Anyone who uses more than two chords is just showing off’:

And, of course, no post on Guthrie would be complete without a reference to Steve Earle’s fantastic tribute to Guthrie, ‘Christmastime In Washington’: