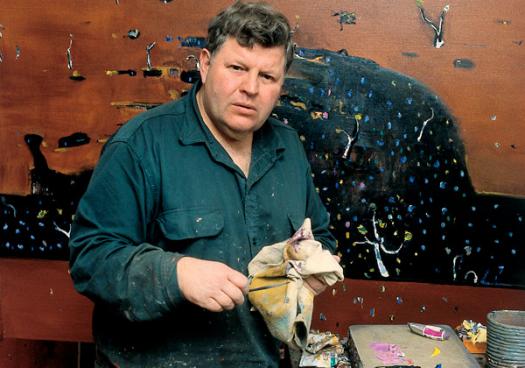 The day has been filled with a number of highlights, not least of which was the discovery of a piece about Fred Williams by Peter Conrad in the latest issue of The Monthly. Williams is certainly among my favourite painters, from Australia or elsewhere. I well remember his show at the National Gallery of Victoria back in the 80s – it was absolutely mind-blowing. Anyway, here’s a wee snippet from Conrad’s piece:

In 1947 the art historian Kenneth Clark sympathised with Sidney Nolan’s early efforts to paint “the Australian countryside (if one can call that inhospitable fringe between sea and desert by such a reassuring name)”. Clark suspected that art, with its play of bright but not blinding light and soft shadow, was disabled because Australia contained “no dark woods … no thick, sappy substances”, no excuse for pictorial impasto.

A decade later, Fred Williams returned to Melbourne after spending six years as a student in London and began to prove Clark wrong. The work Williams had done in England – mostly figurative, with wistful urban vignettes of buskers and beggars, or souvenirs of the desperately jaunty acrobats and comedians in the last remaining music halls – proved to be a false start. In Australia the land was starkly depopulated bush, with no workers tidily pruning the trees, as seen in one of his English etchings, and no church steeples to organise and sanctify the view. The affectionately downtrodden rural scenery of Constable seemed irrelevant, as did Turner’s frothy sublimity. On a trip to Kosciuszko National Park, Williams discovered something quite unlike the Alps that had excited the European Romantics. Storm clouds pummelled the Australian mountains in an aerial bombardment and snow, as it settled onto rock, sketched grotesque, leering faces.

The geometrical boulders painted by Cézanne were of some help, because they reminded Williams to consider what the land was made of, but his visual education did little to prepare him for his first expeditions to Mittagong in the Southern Highlands, New South Wales, and Upwey in the Dandenongs, Victoria. He was bewildered by the lack of a skyline, and by the eye’s inability to find a track through the mess of scrub: perspective is an urban convenience, allowing us to travel to the horizon in a straight line, and Australian space refused to be regulated.

You can read the whole piece here.

I was especially pleased, too, to read that the National Gallery of Australia in Canberra will be hosting an exhibition of Williams’ work entitled ‘Infinite Horizons’, from 12 August to 6 November 2011. It’s enough to make one want to jump onto a plane, very soon.