Few books have left their mark on me as deeply as Vincent Donovan’s Christianity Rediscovered: An Epistle to the Masai. One of the oft-recounted ‘episodes’ in the book concerns Donovan’s ‘conversion’ by a Masai elder who unmasked Donovan’s very Western (enlightenment) notion of faith as predominantly intellectual assent, ‘to agree to’. ‘“To believe” like that’, the elder said, ‘was similar to a white hunter shooting an animal with his gun from a great distance. Only his eyes and his fingers took part in the act. We should find another word’. He continued: ‘for a man really to believe is like a lion going after its prey. His nose and eyes and ears pick up on the prey. His legs give him the speed to catch it. All the power of his body is involved in the terrible death leap and single blow to the neck with the front paw, the blow that actually kills. And as the animal goes down the lion envelops it in his arms (Africans refer to the front legs of an animal as its arms) pulls it to itself, and makes it part of himself. This is the way a lion kills. This is the way a man believes. This is what faith is’.

Donovan’s response? Silence, and amazement: ‘Faith understood like that would explain why, when my own was gone, I ached in every fiber of my being’. But the Masai elder had not finished speaking to Donovan:

‘We did not search you out, Padri … We did not even want you to come to us. You searched us out. You followed us away from your house into the bush, into the plains, into the steppes where our cattle are, into the hills where we take our cattle for water, into our villages, into our homes. You told us of the High God, how we must search for him, even leave our land and our people to find him. But we have not done this. We have not left our land. We have not searched for him. He has searched for us. He has searched us out and found us. All the time we think we are the lion. In the end, the lion is God’. (p. 51)

Does this not go to the heart – and challenge some of our misconceptions – of Advent wherein we celebrate the coming of God, the lion – or, if you prefer Francis Thompson’s image, ‘the hound’ – of heaven among us? For all the time that we are focussed on our waiting, the lion is on the prowl, awaiting his own time to enact the ‘terrible death leap and single blow’ upon us, love’s victim. Clearly, Advent is his waiting too. 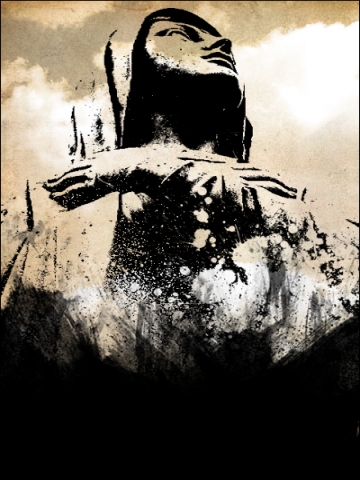 It was this lion, of course – this lion from whose generous bounty we live, gift after gift after gift; this lion who is the glory of the Father – who pounced on Mary, pulled her to himself, and made her part of himself. And it is Mary, perhaps more than any other biblical figure, who gifts us with how one lives under and inside a lion; i.e., who gifts us with how one lives the other side of our death. So her Magnificat, as recorded in the Book of Common Prayer:

My soul doth magnify the Lord: and my spirit hath rejoiced in God my Saviour.
For he hath regarded the lowliness of his handmaiden.
For behold, from henceforth: all generations shall call me blessed.
For he that is mighty hath magnified me: and holy is his Name.
And his mercy is on them that fear him: throughout all generations.
He hath shewed strength with his arm: he hath scattered the proud in the imagination of their hearts.
He hath put down the mighty from their seat: and hath exalted the humble and meek.
He hath filled the hungry with good things: and the rich he hath sent empty away.
He remembering his mercy hath holpen his servant Israel: as he promised to our forefathers, Abraham and his seed for ever.

Time to reflect: Here’s the ‘Magnificat’ by Arvo Pärt, set to Cal Jones’ (Director and Producer) and Ralph Lopatin’s (Cinematographer) ‘Miracle on the Delaware’: