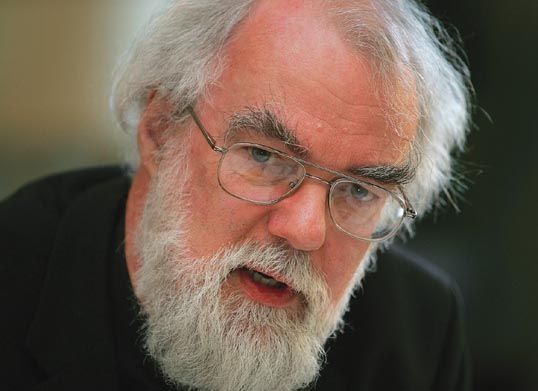 Rowan Williams is in Stuttgart where he has just has delivered the keynote address at the 11th Assembly of the Lutheran World Federation. The theme of the Assembly is ‘Give us this day our daily bread’. Part of Archbishop Williams’ address addressed the topic of forgiveness:

‘The person who asks forgiveness is a person who has renounced the privilege of being right or safe; he has acknowledged that he is hungry for healing, for the bread of acceptance and restoration to relationship.  But equally the person who forgives has renounced the safety of being locked into the position of the offended victim; he has decided to take the risk of creating afresh a relationship known to be dangerous, known to be capable of causing hurt.  Both the giver and the receiver of forgiveness have moved out of the safety zone; they have begun to ask how to receive their humanity as a gift.

Forgiveness is one of the most radical ways in which we are able to nourish one another’s humanity.  When offence is given and hurt is done, the customary human response is withdrawal, the reinforcing of the walls of the private self, with all that this implies about asserting one’s own humanity as a possession rather than receiving it as gift.  The unforgiven and the unforgiving cannot see the other as someone who is part of God’s work of bestowing humanity on them.  To forgive and to be forgiven is to allow yourself to be humanised by those whom you may least want to receive as signs of God’s gift; but this process is intrinsically connected with the prayer for daily bread.  To deny the possibilities of forgiveness would be to say that there are those I have no need of because they have offended me or because they have refused to extend a hand to me.

To forgive is clearly the mark of a humanity touched by God – free from anxiety about identity and safety, free to reach out into what is other, as God does in Jesus Christ.  But it may be that willingness to be forgiven is no less the mark of a humanity touched by God.  It is a matter of being prepared to acknowledge that I cannot grow or flourish without restored relationship, even when this means admitting the ways I have tried to avoid it.  When I am forgiven by the one I have injured, I both accept that I have damaged a relationship, and accept that change is possible.  And if the logic of the Lord’s Prayer is correct, that acceptance arises from and is strengthened by our own freedom to bring about the change that forgiveness entails.

Forgiveness is the exchange of the bread of life and the bread of truth; it is the way in which those who have damaged each other’s humanity and denied its dignity are brought back into a relation where each feeds the other and nurtures their dignity.  It is a gross distortion of forgiveness that sees it as a sort of claim to power over the other – being a patron or a benefactor towards someone less secure.  We should rather think of those extraordinary words in the prophecy of Hosea (11.8-90) about the mercy of God: ‘How can I give you up, O Ephraim? For I am God and not a mortal’.  To forgive is to share in the helplessness of God, who cannot turn from God’s own nature: not to forgive would be for God a wound in the divine life itself.  Not power but the powerlessness of the God whose nature is love is what is shown in the act of forgiving.  The believer rooted in Christ shares that powerlessness, and the deeper the roots go the less possible it is not to forgive.  And to be forgiven is another kind of powerlessness – recognising that I cannot live without the word of mercy, that I cannot complete the task of being myself without the healing of what I have wounded.  Neither the forgiver nor the forgiven acquires the power that simply cuts off the past and leaves us alone to face the future: both have discovered that their past, with all its shadows and injuries, is now what makes it imperative to be reconciled so that they may live more fully from and with each other …

But to speak in these terms of bread and forgiveness and the future presses us towards thinking more about the act in which Christians most clearly set forth these realities as the governing marks of Christian existence: the Lord’s Supper, the Eucharist.  We celebrate this Supper until Christ comes, invoking the Spirit of the coming age to transform the matter of this world into the sheer gift of Christ to us and so invoking the promise of a whole world renewed, perceived and received as gift.  This is, supremely, tomorrow’s bread.

But it is so, of course, not as an object fallen from heaven, but precisely as the bread that is actively shared by Christ’s friends; and it is eaten both as an anticipation of the communion of the world to come and as a memorial of the betrayal and death of Jesus.  That is to say, it is also a sacrament of forgiveness; it is the risen Jesus returning to his unfaithful disciples to create afresh in them this communion of the new world.  The bread that comes down from heaven is bread that is being handled, broken and distributed by a certain kind of community, the community where people recognise their need of absolution and reconciliation with each other.  The community that eats this bread and drinks this cup is one where human beings are learning to accept their vulnerability and need as well as their vocation to feed one another.

So we can connect the prayer for daily bread directly to what goes before it as well as after it in the Lord’s Prayer.  We ask for the Kingdom to come and for God’s purpose to be realised as it is in the liturgy of heaven, in the heavenly Temple, where our basic calling to love and praise is fulfilled.  And in the light of that, we pray for today’s and tomorrow’s bread, for the signs among us of the future of justice and reconciliation, above all as this is shown in mutual forgiveness.

The Lord’s Supper is bread for the world – not simply in virtue of the sacramental bread that is literally shared and consumed, but because it is the sign of a humanity set free for mutual gift and service.  The Church’s mission in God’s world is inseparably bound up with the reality of the common life around Christ’s table, the life of what a great Anglican scholar called homo eucharisticus, the new ‘species’ of humanity that is created and sustained by the Eucharistic gathering and its food and drink.  Here is proclaimed the possibility of reconciled life and the imperative of living so as to nourish the humanity of others.  There is no transforming Eucharistic life if it is not fleshed out in justice and generosity, no proper veneration for the sacramental Body and Blood that is not correspondingly fleshed out in veneration for the neighbour.

If, then, we are called to feed the world – recalling Jesus’ brisk instruction to his disciples to give the multitudes something to eat (Mark 6.37) – the challenge is to become a community that nourishes humanity, a humanity on the one hand open and undefended, on the other creatively engaged with making the neighbour more human.  ‘Give us our daily bread’ must also be a prayer that we may be transformed into homo eucharisticus, that we may become a nourishing Body.  Our internal church debates might look a little different if in each case we asked how this or that issue relates to two fundamental things – our recognition that we need one another for our own nourishment and our readiness to offer all we have and are for the feeding, material and spiritual, of a hungry world’.

One can read the whole address here.

Need more Rowan? The New Statesman this week ran two other pieces on him: this one on citizenship, and this interview in which Williams talks about religious longing, the Church of England, society and the economy.