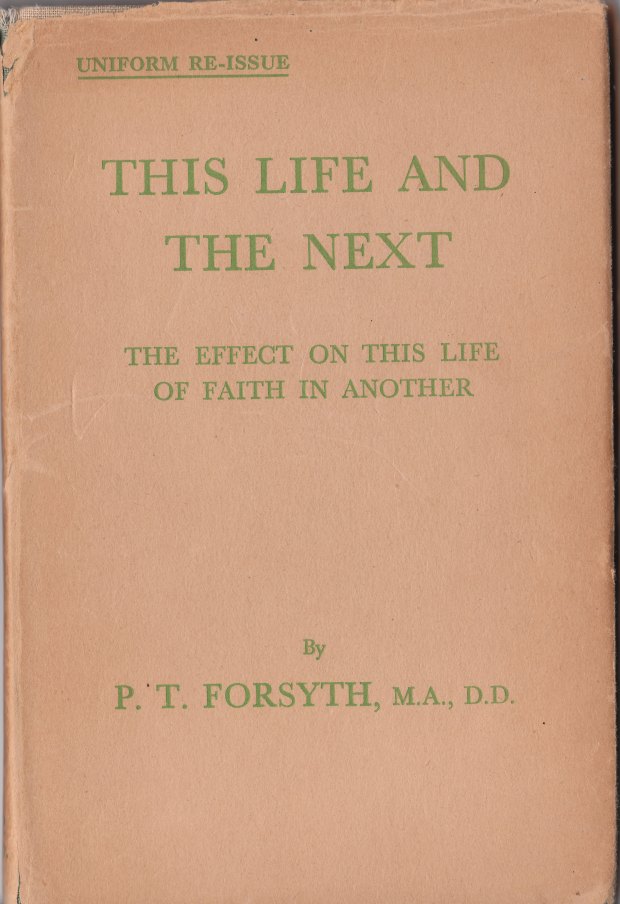 While most of PT Forsyth’s books attracted the publishers’ ‘reprint’ buttons (sometimes up to 11 or 12 different publishers, as was the case with his Lyman Beecher Lectures on Preaching delivered in 1907 at Yale University and subsequently published as Positive Preaching and the Modern Mind), by 1946 all of his books were out of print. Since then, of course, thanks to Independent Press and Hodder and Stoughton and, more recently, to our good friends at New Creation Teaching Ministry and Wipf and Stock, many of Forsyth’s bests works have been resuscitated. But not – at least not yet (one lives by hope, after all) – his final book, This Life and the Next, which first appeared in 1918.

Of the readers of Forsyth, too few have read this volume and, of those, sadly very few have spoken highly of it. Not a few have indicated that the book represents Forsyth’s greatest literary flop, and even his spiral into ‘heresy’, dealing as it does with themes not often tackled by so Protestant of spirits, such as prayer for the dead and what we might refer to as a Protestant reappraisal of the doctrine of purgatory.

But I like This Life and the Next very much and, for those who have previously drunk deeply from other Forsythian wells,  I reckon that it brings together nicely many of the themes and questions with which he increasingly wrestled in the decade before his death in 1921.

Anyway, all that is just a round-about way of saying that I’ve now made it available as a pdf here, ready to join the other links I’ve already provided to a number of his other works. So take up and read; or, should that be, download and read!