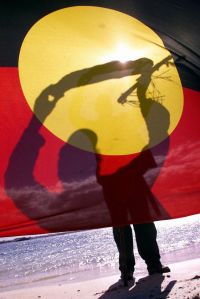 On Tuesday, The Age ran a piece which picked up on some comments made in a recent lecture by Aussie theologian Peter Adam. [The full text of Peter’s talk is available here]. I’ve learnt much from Peter over many years, particularly about pastoral ministry (see his Speaking God’s Words: A Practical Theology of Preaching and Hearing God’s Words: Exploring Biblical Spirituality), and believe that he is always worth listening to, and no less in this case so germane to what it means to be human community (I have posted on issues relating to indigenous Australians elsewhere). Here’s the report from Barney Zwartz:

All non-Aboriginal Australians should be prepared to leave the country if the indigenous people want that, making restitution for the vile sin of genocide, an Anglican leader suggested last night.

If they stayed, they would have to provide whatever recompense indigenous peoples thought appropriate, the Reverend Peter Adam told a Sydney audience.

”It would in fact be possible, even if very difficult and complicated, for Europeans and others to leave Australia. I am not sure where we would go, but that would be our problem,” he said.

Dr Adam said Christian teaching required either restitution – returning what was stolen, the land – or recompense. If those who arrived after 1788 did not leave, they would need to ask each of the indigenous peoples what kind of recompense would be appropriate. This would be complicated and extensive but must be done or the genocide would be trivialised.

”No recompense could ever be satisfactory because what was done was so vile, so immense, so universal, so pervasive, so destructive, so devastating and so irreparable.”

Dr Adam acknowledged that some people had done their best to remedy wrongs, including some government actions, but something ”more drastic” was required.

Dr Adam said churches shared responsibility because the land and wealth of churches came from land stolen from indigenous people. ”The prosperity of our churches has come from the proceeds of crime. Our houses, our churches, our colleges, our shops, our sport grounds, our parks, our courts, our parliaments, our prisons, our hospitals, our roads, our reservoirs are stolen property.”

He called for a co-ordinated recompense by churches that included supporting indigenous Christian ministry and training.

”We European Australians often claim that one of the strengths of the Australian character is ‘caring for the underdog’. That claim is hypocrisy – we do not act with justice, let alone care.”

He said his proposal would be difficult, complicated and costly. ”The alternative is to fail in our moral duty, to admit that for Australia, in Martin Luther King jnr’s words, ‘the bank of justice is bankrupt’.”