Tragically, there remains a tendency in our own day to ‘instrumentalise’ childhood, and so to devalue childhood qua childhood. So Martha Stortz: We point children ‘too rapidly toward the adults they will become’. Childhood is not ‘something you do on the way to becoming an adult’.

One of the most valuable finds while preparing a course recently on a theology of the child has been Karl Rahner’s essay, ‘Ideas for a Theology of Childhood’ in which he was very critical of the cognitive developmental theory approach to assessing childrens’ ‘value’. In the essay Rahner is concerned about a number of things, which Martin Marty helpfully discusses under the following headings:

1. That we interpret the existence of children in a biblical matrix: that we first hear ‘what the divinely revealed word has to say about childhood. In the intention of the Creator and Redeemer of children what meaning does childhood have, and what task does it lay upon us for the perfecting and saving of humanity?’

2. That this beginning represents mystery unveiled. Consequently, those who care for/about children will delight in each act of unveiling and find meaning therein.

[C]hildhood is, in the last analysis, a mystery. It has the force of a beginning and a twofold beginning at that. It is a beginning in the sense of the absolute origin of the individual, and also the beginning which plunges its roots into a history over which the individual himself has no control. Childhood has the force of a beginning such that the future which corresponds to it is not simply the unfolding of some latent interior force, but something freely sent and something which actually comes to meet one. And it is not until this future is actually attained to that the beginning itself is unveiled in its significance, that it is actually given and comes to its own realisation, as a beginning which is open to the absolute beginning of God who is utter mystery, the ineffable and eternal, nameless and precisely as such accepted with love in his divine nature as he who presides over all things.

Put differently, it takes eschatology to make sense of human personhood. He goes on:

3. That the child is open to God, who is the utter mystery.

4. The child is ‘effable’ but finds her origin in God’s ineffability (beyond words). This means, among other things, that those who care for and think about children – including theologians – will recognise in humility that we lack the words and concepts to penetrate the deep mystery of childhood (or human personhood full stop) which lies in God.

5. The child is to resist efforts by adults to control.

6. The child exists always at the threshold of the eternal.

7. The naming of the child is significant.

8. The child is accepted into divine love. On this Marty writes:

God in God’s divine nature always reaches out to accept creatures in love. The child may often deny, ignore, or even repudiate the love of God, also when it is reflected in the faces, arms, and acts of parents and others. Recovery of love, however, always can begin when that little child is allowed and encouraged to remain open to the eternal and thus is able to receive signs of divine love. Though the child is born into a world of accident, chance, contingency, and random happenings she will finally address it in openness to the One “who presides over all things.” Rahner expresses it tersely: “childhood is openness. Human childhood is infinite openness”.

9. The child is an independent and a dependent being.

10. Original childhood is preserved forever. This is a fascinating notion of Rahner’s:

[P]rovided we reverently and lovingly preserve this state of being delivered over to the mystery, life becomes for us a state in which our original childhood is preserved for ever; a state in which we are open to expect the unexpected, to commit ourselves to the incalculable, a state which endows us with the power still to be able to play, to recognise that the powers presiding over our existence are greater than our own designs, and to submit to their control as our deepest good.

Through this essay, Rahner rejects the notion that we progress through ‘stages’ or that we can talk about any life as a series of phases ‘each of which … is exhausted [and] leads on to the next, the very meaning of which is to disappear into the next, to be a preparation for it, to “exist” for the further stages beyond itself’. In such a scenario, he says, ‘childhood itself disappears’. Instead, he insists on the most profound sense of continuity of life. In Marty’s words, ‘For all that flows over the river bed, its base is not mud but rock: in this metaphor, the mystery of the child remains’. Or in Rahner’s:

We only become the children whom we were because we gather up time – and in this our childhood too – into our eternity … The special character of childhood may always be fading away so far as we are concerned, and may also disappear into that which comes afterwards in point of time, so that it seems only to derive its justification and its value from this, but this is not so. This morning does not derive its life simply from the afternoon which follows.

11. The child is open to expecting the unexpected.

12. Play has a special quality. Here we are reminded of Schleiermacher’s theology of the child, and of Barth’s venerating affair with Mozart.

13. The child remains in an ambiguous relation to the concept and practice of control and controlling. Rahner speaks about the need for children to ‘recognise that the powers presiding over our existence are greater than our own designs, and to submit to their control as our deepest good’.

14. The child’s ending is revealed in the beginning.

15. The child is best revealed as a child of God. So Rahner:

But once we perceive the unity which exists between the childhood that comes at the beginning of our lives and the mature childhood, and once we realise the light which each throws upon the other, then it easily becomes clear that childhood in itself, and even at the human level, entails an orientation to God, that it achieves perfection in that relationship which we call being a child of God, that it is not merely a question of a metaphor, the transference of a word from one objective situation to another similar one, in which the comparison is merely secondary and incidental. Here it is rather the reality of childhood in the human sense that is ‘transferred’ into childhood in the divine sense. For if childhood (and this applies to childhood in the human sense as well) is openness, is trustful submission to control by another, the courage to allow fresh horizons, ever new and ever wider, to be opened up before one, a readiness to journey into the untried and the untested (and all this with that deep elemental and ultimate trust which seems inexhaustible in its endurance, the trust which the sceptics and those who have made shipwreck of their lives bitterly describe as ‘naïve’) then in all this that transcendence of faith, hope and love in which the ultimate essence of the basic act of religion precisely consists is already ipso facto an achieved and present fact …

Childhood is openness. Human childhood is infinite openness. The mature childhood of the adult is the attitude in which we bravely and trustfully maintain an infinite openness in all circumstances and despite the experiences of life which seem to invite us to close ourselves. Such openness, infinite and maintained in all circumstances, yet put into practice in the actual manner in which we live our lives, is the expression of man’s religious existence.

Rahner’s essay raises questions about the trinitarian shape of Christian anthropology – that human personhood can be ‘understood’ only insofar as we speak of the dynamic and perichoretic life of God – i.e. of Father, Son and Spirit in their giving and receiving, and in their perfect unity. And so Rahner talks not only about divine Fatherhood – that childhood takes its meaning and raison d’être from the Fatherhood of God, and that maturity means growing into fuller realisation of our being children of the Father – but also about the fact that human being is grounded in the sonship of the Son:

… all childhood in heaven and on earth derives its name and its origin from that one childhood in which the Logos itself receives its own nature in the act of eternal generation by the Father, in which we ourselves are admitted by grace to become participants in this self-bestowal of the Father upon the Logos and so have a share in the divine nature … Childhood is only truly understood, only realises the ultimate depths of its own nature, when it is seen as based upon the foundation of childhood of God. And when we really want to know what the real connection is between human childhood and childhood of God, then we need to commit ourselves to the infinite depths and power of that transcendental movement which is latent in human childhood itself, and allow ourselves to be projected from this into that which is enjoined upon us in the Christian teaching about the Father in heaven, and about men who have received the grace from the life of God himself to be children of God and brothers and sisters of one another. 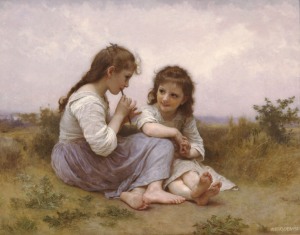 Rahner fails (in this essay) to go on and develop the pneumatalogical dimensions of childhood – and of human being – though this final sentence at least hints of the communality of personhood, that one’s identity is ontologically bound up with that of the other, a reality only truly possible in the Spirit.

One of Rahner’s most pastorally potent claims, however, is his insistence that we do not lose or leave behind our childhood; rather, our childhood goes with us into our eternity:

Childhood endures as that which is given and abiding, the time that has been accepted and lived through freely. Childhood does not constitute past time, time that has eroded away, but rather that which remains, that which is coming to meet us as an intrinsic element in the single and enduring completeness of the time of our existence considered as a unity, that which we call the eternity of man as saved and redeemed. We do not lose childhood as that which recedes ever further into our past, that which remains behind as we advance forward in time, but rather we go towards it as that which has been achieved in time and redeemed forever in time. We only become the children whom we were because we gather up time – and in this our childhood too – into our eternity.