I rarely do this, but some time ago, I posted Thirteen Propositions on Voting. Looking over them again today in light of tomorrow’s US elections, I thought that it was worth a repost:

1. Remember, if you are a Christian then you are part of a pilgrim people who ought never really feel at home in this world because we have been made for another.

2. No matter which government is in power, the Church’s charge remains the same – to preach the Gospel. This will include, among other things, at least a 4-fold word: (i) challenging the structures of our society that demean humanity made in the image of God; (ii) challenging the agendas of our society that leave the poor and the widows and the orphans without a voice; (iii) challenging the complacency of a people who refuse to think, or can’t be bothered thinking, about the consequences of the decisions we are making (this has obvious international consequences); and (iv) challenging the selfishness of those who get fatter and fatter at the expense of others, and at the expense of the creation.

3. God’s people receive their identity not from earthly governments, but from the knowledge that they belong to the Lord Jesus and live under his government, and by his word.

4. Regardless of what’s going on in the fleeting world of politics, the Gospel will always have something to say to the world, and to a Church that must continuously strive to keep itself from ever thinking that the Gospel of the Cross is not enough.

5. We must beware lest we fall into the trap that so many Christians throughout history have fallen into of believing that there is such a thing as the only and true Christian form of government. No political party can be baptised, nor any political system. The radical call of Jesus remains regardless of what the government of the day is doing. This doesn’t mean that we shouldn’t strive to bring about godly reforms and laws in the land, but it does mean that we mustn’t delude ourselves into thinking that we can create a heaven on earth.

6. The temptation to deny Christ exists no matter what the political situation and culture is.

7. Don’t be among those who see voting as a chore and as a painful waste of time. Remember that it is a privilege to vote. God has placed many of us in countries where we have the opportunity to take part in decision making as well as in the keeping of our elected leaders accountable. Thank God that some of God’s people live in such places. [I have always struggled to understand how a democracy can encourage non-compulsory voting, not least given the claim of support for democracy-making in other parts of the world!]

8. Thank God for democracy, but never trust it. ‘Democracy’, wrote Forsyth, ‘is but a half-truth. It must have a King. Aristocracy is just as true and as needful. It builds on an authority in things no less than democracy builds on an equality. The free personality of democracy is only possible under a free authority. The free soul is only possible in a free King … There must always be a House of Moral Lords. There must always be leaders and led, prophets and people, apostles and members, genius and its circle, and elect and a called. Ah! democratic and aristocratic principles are both deep in the foundations of our Christian faith’. At the end of the day, ‘democracy is the recurrent suspicion that more than half of the people are right more than half the time’ (E. B. White). Recall the words of C.S. Lewis: ‘I am a democrat [believer in democracy] because I believe in the Fall of Man. I think most people are democrats for the opposite reason. A great deal of democratic enthusiasm descends from the ideas of people like Rousseau, who believed in democracy because they thought mankind so wise and good that every one deserved a share in the government. The danger of defending democracy on those grounds is that they’re not true … I find that they’re not true without looking further than myself. I don’t deserve a share in governing a hen-roost. Much less a nation … The real reason for democracy is just the reverse. Mankind is so fallen that no man can be trusted with unchecked power over his fellows. Aristotle said that some people were only fit to be slaves. I do not contradict him. But I reject slavery because I see no men fit to be masters’.

9. Remember that even secular leadership comes under the domain of God’s sovereignty, and that God uses non-Christians, as well as Christians, to bring about his purposes. The Bible assures us that all those who serve the people well are servants of God. So thank God for his own sovereign governing of the world (Rom 13:1-7).

10. Pray diligently for the leaders and all those in responsibilities of power and decision making. We are commanded by God to pray for all our leaders. Pray that they would make wise and just decisions and govern with mercy as well as strength. Pray for those who do not know Christ, that they would become Christians. 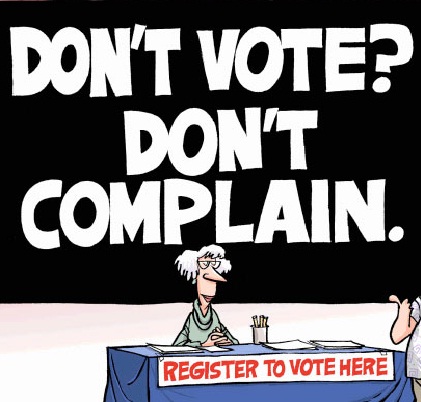 12. Don’t vote for the party who will best serve your pocket and own interests, but vote for the government or person who you prayerfully and honestly believe can best think through the necessary and complex issues with an attitude of serving others within their own country, and beyond.

13. Once the election has taken place, don’t grumble if your choice of party or person is not elected, for Peter tells us to, ‘Live such good lives among the pagans that, though they accuse you of doing wrong, they may see your good deeds and glorify God on the day he visits us. Submit yourselves for the Lord’s sake to every authority instituted among men: whether to the king, as the supreme authority, or to governors, who are sent by him to punish those who do wrong and to commend those who do right. For it is God’s will that by doing good you should silence the ignorant talk of foolish men. Live as free men, but do not use your freedom as a cover-up for evil; live as servants of God. Show proper respect to everyone: Love the brotherhood of believers, fear God, honour the king (1 Peter 2:12-17).