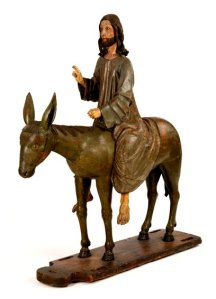 There’s a little study on ‘The Scandal of Palm Sunday’ (based on Hebrews 2.18) in William Stringfellow’s Free in Obedience where he argues that Palm Sunday is not a day of triumph but of dramatic temptation for Christ, and ‘profound frustration’ for the disciples. Moreover, it is for us moderns a ‘symbol of the terrific confusion which burdens the Church as to the meaning and manner of the Christian witness in society … If only Palm Sunday were the outcome of Christ’s ministry, Christians would be rid of the gospel and free from all that distinguishes them as Christians from the rest of the world’ (p. 34). If Christ’s ministry ended here among palm branches and civic celebration, we could be spared the embarrassment of Judas’ betrayal, the apathy and cowardice of the remaining eleven, the mystery of the Last Supper, Gethsemane’s sweat and agony, the accusations of the authorities, the ridicule of the crowd, the cross and the descent into hell, the embarrassment of the resurrection and the ‘awful gift of Pentecost’ (p. 35). ‘Palm Sunday’, Stringfellow insists, ‘is no day of triumph; for Christians it is a day of profound humiliation’ (p. 37).