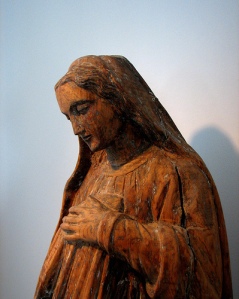 ‘I suppose if you did one of those word association tests on “Advent”, the other word you’d come up with straight away would be “calendar”. That’s all that most people these days are really aware of where Advent is concerned. Advent is a time when you have calendars, and the Advent calendar is a countdown to Christmas, and it means daily sweets and chocolates.

It’s a slightly thin and rather inadequate account of what has for a long time been one of the most important and significant times in the Church’s year – a time of waiting, we sometimes say. But once we’ve said waiting, of course that’s not a very attractive word. We’re not a culture that’s very used to waiting. “Take waiting out of wanting” – that’s a slogan that was very popular some decades ago – and it still governs a great deal of the way we behave. We’d quite like to have things when we decide we want them. And so waiting seems negative, waiting seems perhaps passive, unexciting, the boring bit before we get to the exciting bit. So if there is a period of waiting, getting ready for Christmas, we pad it out with the daily chocolate, to make sure that we’re not feeling too miserable.

Well it’s that kind of waiting that Advent is about. We remember in Advent the time of waiting before the birth of Jesus, and we remember that time of waiting as the Bible shows it to us – as a time when people were indeed longing for something that would change everything, and yet at the same time not quite knowing what that something would be.

During Advent, Christians go back to that time of waiting as the Bible shows it to us. They read again the prophecies in the Hebrew Scriptures and the Old Testament. They read about how people were longing for an end to slavery, longing to be back home in some sense, longing to be at home with God again, longing for reconciliation. And all of that is expressed in the most powerful metaphors, especially in the prophecies of Isaiah; metaphors about the desert blossoming, metaphors about the rain falling, metaphors about day dawning after there’s been a long, long night.

So during this four weeks before Christmas, that’s what Christians are reflecting on. When Jesus comes into the life of the world with something unplanned, overwhelming, something that makes a colossal difference, we long for it and yet we don’t quite know what it’s going to involve. But this is a bit odd isn’t it, you might say. Surely Jesus has come into the world and by now we ought to know what sort of difference he’s made. But the truth is that we don’t yet know the difference Jesus might make. We know some of the difference he’s made to our lives as individuals, to the life of the Christian community, the Church, to the whole world. And yet there’s more. We’re still waiting to see what might happen if Jesus was allowed into our lives that bit more fully; that bit more radically.

So again for Christians Advent is a time when they do a bit of self-examination. Have I allowed Jesus in yet? Has the good news really made the full impact it might make, or is my life still locked into old patterns, into darkness, into slavery, into being not at home with myself or God or with other people? It’s a time of self-examination, of repentance indeed, facing myself honestly and saying sorry for the things that don’t easily face the light. And it’s a time of expectation and a time of hope. A time, therefore, also of quiet.

It’s been said so often it hardly needs saying again, but it is rather a pity that for a few weeks before Christmas we are saturated with Christmas carols. We don’t have quite the sort of quiet we need to think, “Well what would it be if Jesus really came as if for the first time into my life? What would it be for the good news really to change me?” Because for that to happen I need some reflective time; I need some peace; I need to slow down; I need, you might say, to take my time about things. And so all those bits of our contemporary culture which are about rushing to get gratification, getting the results straight away; all those habits in our culture which so drive the crises of our culture, whether it’s the credit crunch or the environmental crisis: all those things we have to cast a rather cold eye on during Advent and say slow down, take time, let yourself grow and open up, rather like a flower coming to blossom. It is a time of expectation, a time of excitement, a time of waiting, a time of peace, a time when we’re clearing our hearts and our minds a bit so we really can see clearly when Jesus arrives, and feel fully the impact of his coming.

It’s a time, as I’ve said, for going back to the prophecies, the foreshadowings of Jesus’ comings that we find in the Bible, and a time when two figures above all are representative of how we’re thinking and how we’re feeling. In the New Testament those two figures who are there right from the start of the Gospel story are

John the Baptist, Jesus’ cousin and forerunner, and the Blessed Virgin Mary, Jesus’ mother. John the Baptist, you might say, sums up the whole drive, the whole story of the Bible so far. “Yes,” says John the Baptist, “something is about to happen and you’ve very little idea what it is and you’ve no idea how radical and how complete a change it will involve.” So John the Baptist can say when the Promised One arrives, “I won’t be worthy even to untie his shoe. He belongs in a different world; a different league.” So John the Baptist is pointing forward and saying, “Everything you’ve always hoped for, everything you’ve longed for, the change, the freedom, the peace, is about to come. It will be a shock coping with that. Get yourself ready. Make straight the Lord’s path”, says John, quoting the old prophecies. And Mary, who in many icons of ancient Christian art stands on the other side of Jesus from John the Baptist, the two of them flanking the figure of Jesus – Mary is the one who quietly receives into herself, into her body, heart and mind, the full reality of what’s coming. She receives it so deeply that the promise becomes real, physically real, in her; it becomes the child that’s going to be Jesus. And she has to wait with the long nine months of pregnancy, faithfully, quietly, waiting to see what comes, ready to be changed as every mother is changed by the birth of a child.

These are the two figures that Christians think about a lot in Advent. When you light Advent wreaths in churches, two of the candles represent Mary and John the Baptist. In Advent, Christians have for centuries thought about death and judgement, about heaven and hell. They’ve thought about the way in which, when we’re up against the truth for the first time, when we really see what the reality of God is like, it will be a shock to the system. It may be deeply painful as well as deeply joyful. Death and judgement, and hell and heaven. It will be that experience of confronting the truth in such a way that you’re changed for good. We say yes to all of that, even with the pain and the risk. Or, God forbid, we say no, we can’t cope with the truth, we’d prefer our own darkness. And so part of our self-examination during Advent is looking into ourselves and saying, “Can I get myself to the point where I can look at God and say there’s truth and there’s beauty and light and love and it’s painful for me, weak and stupid though I am, to face that, and yet I’d rather be there with the truth, however much it costs, than be locked up with myself?”

During Advent, we try to get ourselves a bit more used to the truth – the truth about ourselves, which is not always very encouraging, but the truth about God above all which is always encouraging. The One who comes will come with a great challenge. It will be like fire on the earth, as the Bible says. And yet the One who comes is coming in love. He’s coming to set us free. And that’s something well worth waiting for’.