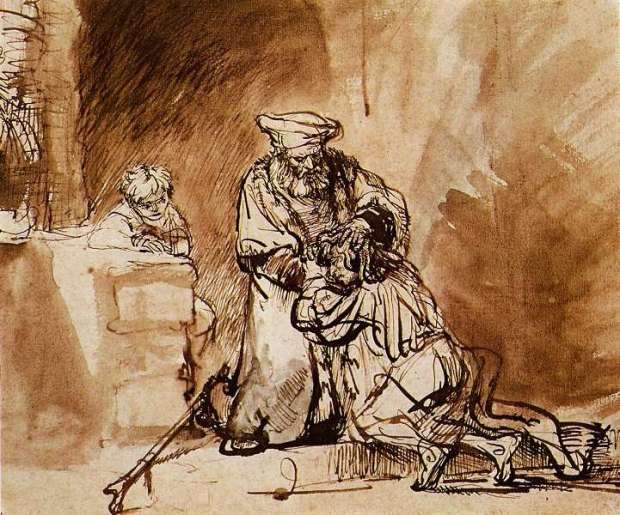 How old the story is, we have come to see, and yet how true.
The kid’s back home at last, knowing he’s lost everything
the old man gave him, spent on booze and one-night
stands, a sucker for every sob story his friends had found
to separate him from what they saw as their inheritance.
And, now, when the cash was gone, and the kid out on his own,

alone, reduced to doling out ripe slops to pigs, while his own
gut growled for what the swine had trampled on, true
to their indifferent boorish nature (the inheritance
all such pigs are born to), the kid kept thinking how everything
he’d ever needed the old man had always given him. And so he found
himself heading home at last, even as his sick soul’s dark night—

replete with hissing fevers—loomed ever larger. So, with one eye open night
after chilly night in some piss-soaked alleyway he longed to call his own
as he watched for snarling dogs and whistling perverts, he somehow found
himself at last back home, where his father—and this is true, true,
so help me God—ran out in ragged slippers to hold his lost son up, everything
forgiven, as the kid slumped earthward, believing his inheritance

had gone up in acrid smoke. But the father knew his real inheritance—
the only thing that mattered—was what the cold, indifferent night
had unwillingly given up: his boy kneeling there before him, the one thing
worth living for: his kid back home again, alive, his own
beloved son, chastened, yes, but somehow still alive. True,
the boy looked awful and he stank of shit, but the old man found

his deepest prayers were answered, that the one he’d lost was found
and home again. Time to celebrate, then, time to make a new inheritance
for his son—now sobered—something the kid would try to earn. True,
all of this would only come with the daily round of things. But that night
the old man meant to throw a party for everyone, serve up his own
best fattened calf, along with wine and cakes and song, oh, everything!

But then there was the other son, the good one, who’d done everything
the old man had ever asked of him, dutifully, and had even found
some satisfaction in doing it, if not much fun, and just then did not feel like own-
ing that he knew this ragged wretch who no doubt meant to eat up his inheritance.
You see him there, bigger than the kneeling son, truculent, the bleak night
shadows etched there on his face, and justified, if what we know about ourselves is true.

And the older son is right, it’s true, which the father knows as he knows day from night.
God knows the good son deserves the inheritance which for him means everything,
But these are his sons, his very own, of whom one at least was lost and has been found.

(Some people, like Anne Stewart, literally live – or at least try to live – on the assumption that the kind of economy of relations witnessed to in Luke 15 might actually say something about how things are. The world is possible because of such saints. So is the Church. And just as I can no longer read the Book of Exodus without seeing Charlton Heston, I can no longer read Luke 15 without recalling Anne’s passion for divine irresponsibility. Thanks Anne. And thanks too for ragged slippers that move at such speed to hold up lost children.

‘The first thing that must strike a non-Christian about the Christian’s faith is that it obviously presumes far too much. It is too good to be true: the mystery of being, revealed as absolute love, condescending to wash his creatures’ feet, and even their souls, taking upon himself all the confusion of guilt, all the God-directed hatred, all the accusations showered upon him with cudgels, all the disbelief that arrogantly covers up what he had revealed, all the mocking hostility that once and for all nailed down his inconceivable movement of self-abasement – in order to pardon his creature, before himself and the world’. – Hans Urs von Balthasar, Love Alone is Credible (San Francisco: Ignatius Press, 2004), 102.)