Bruce Hamill and I have spent the last 10 days or so in Grand Rapids, Michigan, serving as delegates of the Presbyterian Church of Aotearoa New Zealand at the United General Council of the newly-formed World Communion of Reformed Churches (WCRC). The Council has been involved in the bringing together of two former bodies – the World Alliance of Reformed Churches (WARC) and the Reformed Ecumenical Council (REC) – into one World Communion that represents over 80 million Reformed Christians worldwide. It has been a very exciting meeting to attend, and I have felt a deep sense of privilege in being here as a participant.

It has been a rich time of worship, of meeting delegates and visitors from all over the world, of catching up with old friends and making new ones, of sharing resources and ideas about ministry, theological education and mission, of attending to administrative matters (there was no shortage of this), of hearing about what God and God’s people are doing – and are not doing – in different parts of the globe, and of reflecting on both the catholicity and the reformed identity of this branch of the Church, among other things. And, as is typically the case at these ecumenical gatherings, there has been no shortage of talk about ‘justice’, ‘peace’, ‘mission, ‘unity’, and about addressing the powers of empire. The spirit of Accra abides.

One of the issues that I was keen to ‘place on the table’ at this gathering concerned the relationship between Reformed Churches and the State. It seems to me that a tradition like mine which is so heavily imbedded in what is now a rapidly-disappearing Christendom has well and truly entered (in most parts of the world) a time in which our relationship with the State is overdue for a rethink. Put differently, is it time for Reformed Churches who have long been in bed with the State to start thinking about wearing an ecclesiastical condom, at least at more ‘risky’ times of the month? Conversely, is it time for Reformed Churches who have long  sidelined themselves from their societies to re-think their bed etiquette? One place that I thought that such a rethink may be encouraged is in the teasing out of a few implications of being a ‘communion’, as opposed to a being a mere ‘alliance’ (Bruce has more to say about this distinction here). So I trundled along to a section called ‘Reformed Identity, Theology and Communion’, naïvely thinking that the topic of conversation at such a group might have at least something to do with Reformed identity, theology and/or communion.

After what felt like countless hours of talking around in circles about neither Reformed identity, nor theology, nor communion – hours made all the more painful by an incompetent section moderator – I offered the following proposal:

‘The World Communion of Reformed Churches acknowledges that the affirmation of communion has implications for our life together. The shape of this life together is fashioned upon the Gospel, that is, upon the gracious economy of the Triune God who makes us one.

Our identity and communion is created, sustained and fleshed out by Jesus Christ. This reality, which the Bible calls ‘life in Christ Jesus’ (Rom 6.23; 1 Cor 1.30; 2 Tim 3.12), redefines and reconstitutes our identity thus making all other identify-forming relationships secondary.

Therefore, as one of the many concrete expressions of this communion:

We are a people who confess to follow one who puts himself in the way of evil, who intervenes on behalf of the oppressed and the weak and the downtrodden, and who does so not with swords and spears, but by bearing on his body the blows and resisting retaliation. Jesus confronts the cycle of violence and declares that ‘The violence stops with me’. He suffers in his own person the wrong that is done, and trusts the outcome to God. That is the pattern of obedient life that Christians are called to follow and into which they are incorporated through baptism. Forgiveness, compassion, prayer and sacrifice are the tools that Christ takes up in his war against evil and sin. When those who bear his name take up arms to wage war, and insist that such action is necessary, unavoidable and a last resort, they are resorting to a logic other than that of the Logos incarnate. It must be confessed therefore that they have failed in the call to inhabit God’s new creation, a call which allows for no exceptions when it comes to loving even our enemies’. 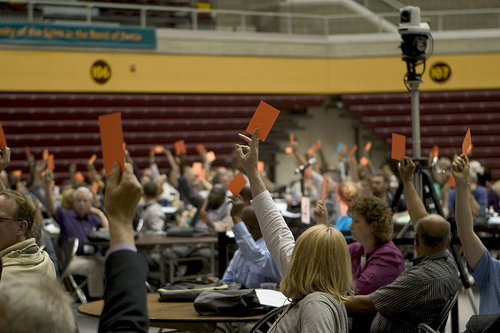 Unsurprisingly, the proposal received very little support (something like 15% I guess). That it received so little support was less disappointing to me, however, than the fact that here was a group of intelligent and articulate reformed thinkers and church leaders who – because of an incompetent moderator – were not afforded the opportunity to even discuss the issue/s being raised. It was, sadly, a wasted opportunity and I can only thank God for the many informal discussions that arose after my presentation. It was also a learning opportunity for me in ecumenical diplomacy (something that I hope never to be too good at) and at the importance of having well-moderated meetings.

After dusting myself off, I decided to give my modest proposal another (if even-more modest) crack in a session the following day, and that via the addition of a single sentence to a report of the Policy Committee. The Report serves as the guide for the future work of the Executive Committee of the WCRC. To the recommendation that ‘WCRC, working with appropriate member churches and other organizations, seek ways to accompany member churches through prophetic solidarity, education and advocacy’, I suggested the following addition: ‘This will include a commitment to not participate in violence against one another’. This time, the proposal was enthusiastically received, but again there was no discussion. And perhaps just as well, for a body of this size (around 1000) to engage in a meaningful conversation about the implications of such a statement would have us stuck here in Grand Rapids for many more moons, and while Calvin College is a extraordinarily-beautiful setting to be hanging out in for a few weeks, I’m looking forward to getting home and to doing some further thinking myself about reformed identity and about the shape of reformed ecclesiology in post-Christendom states.