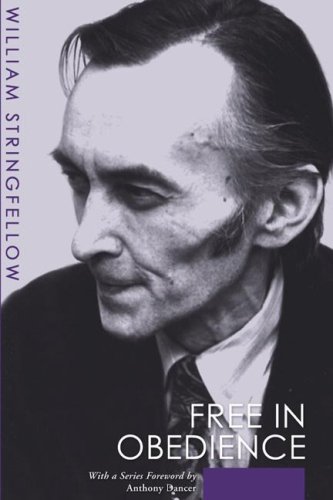 Stringfellow continues to expose the deathliness of the principalities and powers in his second study, ‘The Scandal of Palm Sunday’, which is based on Hebrews 2:18.

‘Men live in the city of death. All the cities and societies of the world are places of death’ (p. 31). The temptation that death holds out to us, Stringfellow avers, is to save us from death: ‘that is how cruel and vain and filled with guile death is’ (p. 31). Plato, Constantine, Rousseau, Jefferson and Marx are all authors of societal forms by which we are solicited, enticed and/or coerced into death’s service. But God is about planting and building a free society, and God does so among the dead. The foundation of this society can only rest on one who exercises freedom and authority over the machinery of death; namely Jesus Christ, who forgives the idolators of death, and who in his cross makes us members of his body. But,

Men hate the Cross because it means a salvation which is unearned, undeserved, unmerited. Men would much prefer God to punish them than to forgive them because that would mean that God is dependent upon men and needed their obedience to be their God. Then God would be in fact no different from an idol of race, nation, family, or whatever, and a man would feel justified either by his obedience to the idol or by the punishment of his disobedience. (p. 33)

Stringfellow believes that Palm Sunday is not a day of triumph but of dramatic temptation for Christ, and ‘profound frustration’ for the disciples. Moreover, it is for us moderns a ‘symbol of the terrific confusion which burdens the Church as to the meaning and manner of the Christian witness in society … If only Palm Sunday were the outcome of Christ’s ministry, Christians would be rid of the gospel and free from all that distinguishes them as Christians from the rest of the world’ (p. 34). If Christ’s ministry ended here among palm branches and civic celebration, we could be spared the embarrassment of Judas’ betrayal, the apathy and cowardice of the remaining eleven, the mystery of the Last Supper, Gethsemane’s sweat and agony, the accusations of the authorities, the ridicule of the crowd, the cross and the descent into hell, the embarrassment of the resurrection and the ‘awful gift of Pentecost’ (p. 35).

But here the wilderness tempter enters the city to tempt Christ, the embodiment of Israel in one person, with the same offer of worldly power, only this time he uses Messiah’s disciples to do the work. And again, Jesus is victorious over the temptations of death. ‘Palm Sunday is no day of triumph; for Christians it is a day of profound humiliation’ (p. 37).

Stringfellow believes that Palm Sunday represents an invitation to the Church to enter into the depths of the world’s existence with nothing to offer but their own lives. We can be so given to the world that we are, in Christ, secure from every threat that death may make. This givenness is the exercise of our ultimate freedom, and represents a sacramental rather than a moralistic witness. It means the Church’s involvement rather than distance, realism rather than withdrawal, knowledge rather than ignorance: ‘The ethics of witness to redemption are sacramental ethics of grace, rather than of prudence or of law’ (p. 39). This calls for being at the full disposal of the world with no strings attached and empirically free from the threat of death.

That is where the irony and confusion of so much of what is asserted to be Christian witness in society nowadays comes in. The mission to the city and specifically to the slums, the decrepit and depressed regions of the city, has been engineered by bodies, councils, committees, and commission who neither individually nor corporately are seriously or radically involved, and certainly not to the point of risking possession or reputations, much less death itself. Instead these ecclesiastical engineers ponder statistics of urban development, of the migration of races and nationalities, of the topography of the churches of the city; then they decide that a church building is needed here or a settlement house must be constructed there (p. 40).

I lost count of how many times Stringfellow talks in this chapter about ‘the ethics of witness’, but his point is in your face, and deserves to be.

Don’t forget Wipf & Stock’s offer to readers of Per Crucem ad Lucem of 40% off the retail price of any of the Stringfellow volumes. To obtain the 40% discount, just include the coupon code STRINGFELLOW with your order.