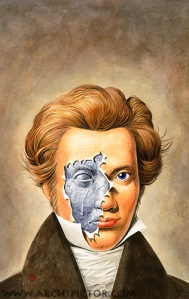 ‘If a poet or an artist puts himself into his Productions he is criticized. But that is exactly what God does, he does so in Christ. And precisely that is Christianity. The creation was really only completed when God included himself in it. Before the coming of Christ, God was certainly in the creation, but as an invisible sign, like the watermark in paper. But the creation was completed by the Incarnation because God thereby included himself in it’. – Søren Kierkegaard, The Journals of Kierkegaard (edited by Alexander Dru. New York: Harper & Brothers, 1959), 324.